Route in Florence: Discovering the Works of Michelangelo 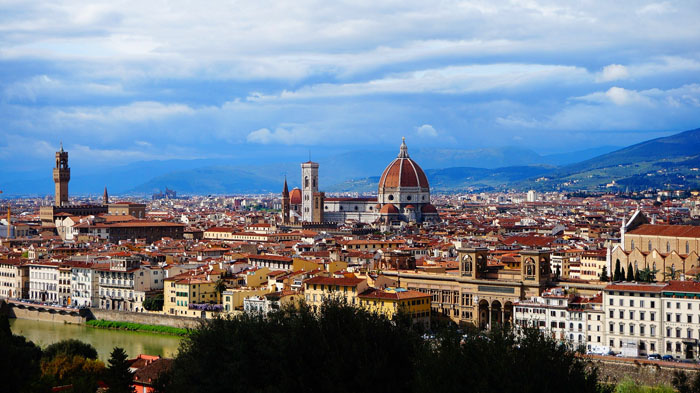 David in the Accademia and many more!

Michelangelo di Lodovico Buonarroti Simoni, better known as simply Michelangelo, was one of the most influential artists of the Italian Renaissance. Most of his masterpieces as a painter, sculptor and architect are to be found in Italy, and Florence is home to many of them, since this was the hometown of the Medici family, Michelangelo’s patrons. If you are planning to visit the Tuscan capital, make sure you discover as many of his works as possible. Here is one possible route around the city.

Michelangelo’s work in Florence and where to find it

Without a doubt, Michelangelo’s David is one of the most famous pieces in all Florence. You’ll find it in every souvenir shop in many different forms, including printed aprons and underwear! But this world-famous artist left many more artworks throughout the city. Let’s discover them!

Palazzo Vecchio: one of the most photographed palaces in Florence. Located in the Piazza della Signoria, it is famous for its imposing Salone dei Cinquecento, with many works of art hanging from its walls. This room has featured in many films, such as Inferno, based on Dan Brown’s novel, and houses Michelangelo’s marble sculpture The Genius of Victory, representing two fighting figures, the victor and the loser, a remarkable theme for its time. For this palace, Michelangelo also designed a fresco based on The Battle of Cascina (a war that pitted Florence against Pisa), but unfortunately it was never painted and the sketches were destroyed.

Casa Buonarroti: one of the houses where the artist lived, now a museum. Here you can find one of his earliest sculptures, Madonna of the Stairs, as well as the sculpture Battle of the Centaurs and his clay model for the sculpture Two Fighters.

Basilica di San Lorenzo: although it is not one of the most beautiful buildings from the outside, this basilica hides a large number of artistic gems inside, including the sculptures in the Medici Chapel, the Tomb of Giuliano de’ Medici and the Tomb of Lorenzo II de’ Medici and the sculpture Virgin with Child. Architecturally, you must see the New Medici Chapel and the New Sacristy, the staircase and vestibule of the Laurentian Library and the Laurentian Library itself, one of the leading libraries in the whole of Italy, with some 11,000 manuscripts and 2,000 papyruses.

Museo Nazionale del Bargello: here you can enjoy the largest collection of Italian sculptures from the 14th to 16th centuries. The bust of Brutus, the sculpture of Bacchus and the relief sculpture of Tondo Pitti are just some of the works by Michelangelo housed there.

Galleria dell’Accademia: of all the numerous museums in Florence, above all we recommend you visit the Galleria dell’Accademia. Make sure you buy your ticket in advance! Michelangelo’s David is the centre of attention and deservedly so: standing 5.17 metres high and weighing 5.57 tonnes, it represents King David before his confrontation with the giant Goliath. This sculpture became the symbol of the Republic of Florence against the hegemony of its overthrown leaders, the Medici. But David is not the only work by Michelangelo at the Accademia: you can also admire his Palestrina Pietà and his sculpture of Saint Matthew, the only sculpture of the apostles he managed to start for Santa Maria del Fiore. Other famous sculptures by him include those of slaves designed for the tomb of Pope Julius II: at the Accademia you can see Young Slave, Atlas Slave, Bearded Slave and Awakening Slave.

Basilica di Santo Spirito: this is one of the main churches in Florence and is home to Michelangelo’s Crucifix. The artist was a guest at the convent at the age of 17 and was able to make anatomical sketches of bodies in the convent hospital. As a sign of his gratitude, he sculpted this well-known crucifix, now housed in the Sacristy.

Museo dell’Opera del Duomo: it has many sculptures and original pieces from the Duomo, Baptistery and Campanile that have been replaced by copies over time. These include Michelangelo’s The Deposition. Take a close look, because one of the figures represents Michelangelo himself! The artist designed it for his tomb in the basilica of Santa Maria Maggiore in Rome. When he decided he would prefer to be laid to rest in Florence, he sold the sculpture.

Galleria degli Uffizi: home to one of the oldest and most famous art collections in the world. It is the most popular art gallery in Italy and its gems include Michelangelo’s Doni Tondo, an oil and tempera panel painting representing the Holy Family.

Posted in Art and Museums in Florence, Florence
Marketing Team