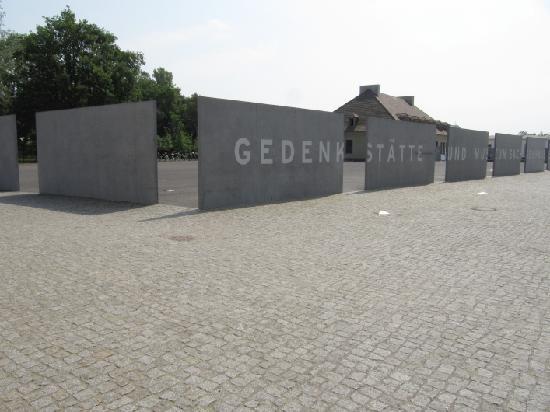 Sachsenhausen Memorial on the outskirts of Berlin

On the outskirts of Berlin, in the town of Oranienburg, remains a stark reminder of the horrors and atrocities perpetrated by the Nazi Regime, the Sachsenhausen Concentration Camp. It is well worth a day trip from Berlin to visit what was built as a model concentration camp and became the administration centre for the entire camp network across Europe.

The Sachsenhausen Concentration Camp was built in 1936 by prisoners from the nearby Emsland Camps. It was the first camp to be built after SS leader Himmler had been appointed as the Chief of German Police. Designed by SS architects it was conceived as the perfect concentration camp, one in which prisoners were submitted to the absolute power of the SS. In 1938 the camp became the administrative centre for the entire camp system across Europe.

During the years 1936-1945 more than 200,000 people were imprisoned at the Sachsenhausen Concentration Camp. At first the prisoners at the camp were mostly political opponents of the Nazi Regime however after 1938 the camp was increasingly used as a tool of the Nazi’s racists social and population policies. The majority of the prisoners were Jews, Roma, homosexuals and criminals.

Many Jewish prisoners were deported from Sachsenhausen to Auschwitz in October 1942. Other prisoners had to undergo forced labour,working in the slow walking unit, the brickworks and armament factories. It is estimated that upwards of 60,000 people were murdered in the camp. Hunger, exhaustion, illness, abuse, medical experiments, mass murder and public executions were the primary causes of death.

The Sachsenhausen Concentration Camp was evacuated in 1945, when the Russian Army reached the Oder River. At this point many dangerous or weak prisoners were murdered. The remaining prisoners were marched towards the north-west with many of them dying along the route. They were eventually rescued by the American and Russian Armies. Prisoners remaining at the camp were liberated by Soviet and Polish soldiers.

Today the Camp can be visited as a day trip from Berlin. Many of the original buildings are still standing and visitors can learn about the history through exhibitions which include documentation, film and artefacts. There are guided tours of the Camp which take in the Barracks, Prison, Kitchen, Guard Towers, Infirmary and Commandant’s House. It is a sombre reminder of the atrocities committed by the Nazi regime and deserves a day trip from Berlin to remember the millions of victims of the regime.

Posted in Berlin, Things to do in Berlin
James