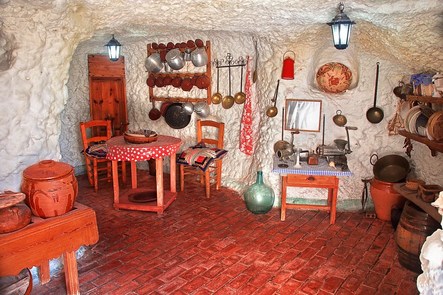 Caves and flamenco in Sacromonte, Granada

Sacromonte is one of the most picturesque and authentic districts in Granada, most famous for its caves and flamenco spirit. Situated just opposite the Alhambra, this district, home to artists and a more bohemian crowd, captivates many for its personality and the beauty of its surroundings.

The Sacromonte caves, with their whitewashed walls, are very typical of this district. They are all clustered around a gully, forming irregular streets and squares. The origin of these caves has become lost in legend. However, it would appear that they started digging into the hill in the 16th century when the Muslims and Jews were driven from their homes, which were later taken over by gypsies. Due to their being outside the city walls, these unusually houses started sinking into the rock and remained out of administrative control.

At the Sacromonte Interpretation Centre, visitors get the chance to see what the caves are like inside and discover the evolution and history of the district. The original look of the cave insides has been recuperated, with the furniture, decoration and utensils from centuries all recovered. Visitors can also admire old tools, looms, forges, basketwork, ceramics and traditional craftworks. A visit around the museum takes approximately an hour. It also hosts art exhibitions and over summer outdoor flamenco shows are organised, which takes us to the other aspect that the district is famous for.

Sacromonte is the birthplace of flamenco, and one of the neighbourhoods in the city where you can really enjoy the power and spirit of flamenco. Zambra, comprising a variety of flamenco that originates from Morisco dances and wedding nuptials, was born here. The word zambra comes from Arabic and means “party”. It is used to refer to the dance, party and caves where the celebrations are carried out.

Flamenco shows in Sacromonte usually start around 9 in the evening and carry on well into the early morning. There are numerous flamenco bars, zambras and caves where you can watch flamenco, and in some, you can also have something to eat. Tortilla de Sacramonte is the typical dish of the district, comprising a tasty omelette made with fried ram’s brain, as well as nuts, peas, potato, ham and peppers.

Either way, you should stop off in Sacromonte during your stay in Granada as in addition to the caves, flamenco and museum, it has a beautiful abbey and magnificent views of the red Alhambra walls.