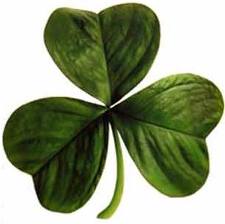 They say that the Irish are everywhere and they’re not wrong. On the 17th of March they celebrate Saint Patrick’s Day, in honour of their Patron Saint comprising one of the most popular celebrations in the world. is one of the big epicentres of this special day during which everything is dyed green and litres of alcohol are consumed.

In the mid 19th century, many emigrated from to large cities such as , and to escape the great potato famine. And with them, they took their religion, music, traditions and Saint Patrick’s Day. Normally huge parades take place to celebrate, and typical Irish dishes and beverages are consumed such as whisky and Guinness. The colour green and shamrock are the symbol of Saint Patrick’s Day and many bars sell beer tinted green especially for the occasion. Even the famous is lit up in green on Saint Patrick’s Day.

The Saint Patrick Day shamrock is the official symbol of
. Although the shamrock is a symbol of good luck and of Celtic heritage, there are some that say the
shamrock illustrates the Christian doctrine of the Trinity when they Christianised the pagans. Other legends go that Saint Patrick taught the Irish to distil…which leads us to the other major part of this special day. It is said that at least a couple of beers should be drank to celebrate Saint Patrick’s Day, which is good enough excuse for many who fill up the bars and pubs festively dressed up in green. If you would like to join in the fun, Molly’s, McSorley’s and P.J. Clarke’s feature amongst the most popular Irish pubs in New York.

The Saint Patrick’s Day parade in consists of the biggest in the world. More than 2 million spectators turn up every year. The fire department, military and police with Irish ancestors, as well as cultural associations, migrants and music bands, all participate in the parade. The first official parade took place in 1766 led by Irish soldiers On Her Majesty’s Service in the American colonies. Therefore, every year, a military unit from the National Guard, the 69th Infantry Regiment, leads the procession.

The Saint Patrick’s Day parade kicks off at 11am on

The best place to get a glimpse of the parade is at the end part of the route, from 60th street and the city outskirts. Saint Patrick’s isn’t a bank holiday in New York and in the Midtown area there are lots of offices and shops so there’ll be a lot of people and it’ll be quite hectic. We advise that you get to the area by the subway as the majority of the streets in the surrounding area will be cut off.