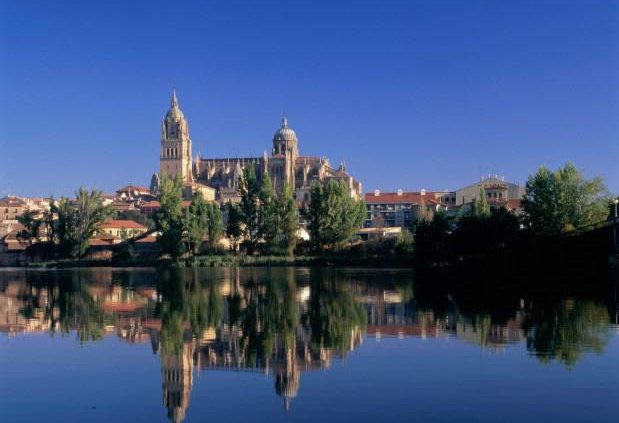 The main sights of Salamanca

The University of Salamanca, one of the most important features of our newest destination, is known as one of the “four leading lights of the world”, along with Paris, Bologna and Oxford. And it’s true that the whole city, set in the lonely rolling plains of Castilla y León, does have a certain luminescent quality about it. Also called “the Golden city”, Salamanca is warm sandstone, ancient buildings, and a roaring nightlife. Here, we’ve prepared a five-minute guide to the main tourist attractions of Salamanca.

1. The Plaza Mayor of Salamanca

Also known as the “living room” of the city, this beautiful baroque square is the pulsing central heart of, and one of the main things to see in Salamanca. Built in baroque style, the Plaza Mayor is a museum awash with life; filled with people enjoying a coffee with friends or going for a stroll. If you’re in Salamanca for any length of time, you’re sure to pass through here at some point.

2. The University of Salamanca

The University of Salamanca is the oldest in Spain and continues to be a popular student choice, with tens of thousands of students flocking here every year. As well as Salamanca’s excellent nightlife, many overseas students come to learn the ‘pure’ form of Spanish which is spoken here. Built in the Plateresque style, the University’s main attractions include the gigantic Library and the Casa de las Conchas, whose shell-decorated façade is emblematic of the city. Look for the tiny frog hidden on the building’s main façade – if you can find it (without help!), legend tells that you’re guaranteed good luck. Addresses, opening hours and prices can be seen.

Salamanca has two cathedrals: the Old Cathedral and the New Cathedral. ‘New’ is a fairly relative term here – the Cathedral began being built in the 16th century. This Gothic Cathedral contains ornate carvings (to which, during restoration, the surprising image of an astronaut was added). The Old Cathedral (12th – 14th century) contains stunning paintings and altarpieces. All necessary practical information is detailed on the official website of the Cathedrals.

Salamanca is reminiscent of other university towns like Oxford in the sense that, everywhere you look, there seems to be some hidden cultural gem to be uncovered. There’s plenty more things to see in Salamanca that we haven’t mentioned, including La Salina Palace, Solis Palis, the Bullring and the Conference Centre. Or you might prefer to just wander aimlessly through the city, slowly unwrapping its secrets and losing yourself among the buzzing cafés and historical façades.