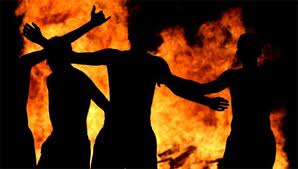 The summer solstice, also known in Spain as the night of San Juan, is one of the largest celebrations on Spanish calendars, and has been considered a magical night for as long as can be remembered. Every year, on the 23rd of July, bonfires and fireworks welcome in the beginning of summer.

Spirits, imps and magical traditions related to fire and water always accompany the shortest night of the year, a special date in which you can truly enjoy the charms of Cadiz and its surroundings.

Traditionally, the night of San Juan in Tarifa (a seaside village close to Cadiz) is celebrated by lighting bonfires along almost all the beaches. The flames are reflected in the dark waters and light up the line of the coast. The fires become a meeting point for people to organise beach parties and sometimes even barbeques, in which sardines and meat are grilled. Obviously music, with drums and percussion groups, dancing and smiles, also play their part.

After midnight, in Chica beach, opposite the Isla de las Palomas (Island of the Doves), “juanillos” are burned. Juanillos are cloth dolls, typical of the province of Cadiz, whose burning ensures good luck in the coming months. Although everybody can make their own juanillo, if you’re not feeling particularly artistic you can simply write a wish on paper and throw it into the bonfire. They say that they come true, you know… To attract good luck and keep the bad spirits away, kids (and big kids) often jump into the sea during the night of San Juan in Tarifa. The water might be a bit cold at this time of night, but who doesn’t enjoy an extra dose of fun and good luck!

And, when the bonfires on the beach are put out, the party continues in the bars and clubs of Tarifa. Almost all put on special events in order to celebrate this all-nighter, so don’t expect to get to bed before dawn…

Posted in Tarifa, Things to do in Tarifa
Laura