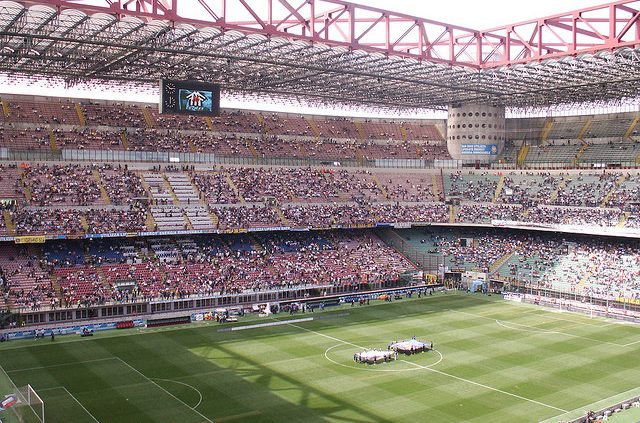 The San Siro football stadium, officially named Stadio Giuseppe Meazza, is the home stadium of both AC Milan and FC Inter. Located in the San Siro district, the stadium’s informal name soon became San Siro. Besides a football field and lots of seats for the spectators, the stadium also has a museum and offices. It is one of the only stadiums in the world with a five star FIFA qualification. This wonderful sports palace is unique in its kind.

The San Siro stadium was originally opened in 1926 by the man that then was the president of AC Milan, Piero Pirelli. The architects decided to build a football stadium without athletics tracks, which characterized the Italian stadiums built with public funds. At first the stadium belonged to only AC Milan, but after World War 2 it also became home to FC inter. Since the build, the stadium has been renovated and expanded multiple times. The last expansion was in 1990, bringing the total amount of seats to 80.000.

Although San Siro usually is the home of AC Milan and FC Inter, it sometimes makes place for rugby matches and concerts. Also Champions League and UEFA Cup finals have been played in the arena of Milan. The Stadium is located 5km outside the city centre of Milan. It is easily accessible by metro and during matches or events free buses drive between the Lotto station and the San Siro.

Besides visiting the museum, there is also the option of taking a guided tour true the stadium. The guide will tell you all about the history of the stadium and both football teams.

Even when it’s empty it still is a thrill to feel the magic sphere in this gigantic stadium, definitely worth visiting!

The San Siro stadium houses a great museum based on the history of AC Milan and FC Inter. The museum is the first and only museum in Italy that is located inside a stadium. The museum was founded by Onorato Arisi and started of with his private collection. After a while the museum was officially opened to the general public in 1996. There are statues of the best players that ever served both clubs and many trophies and medals are blinking in the showcases. Tickets for the museum are available at the stadium.

Posted in Milan, Things to do in Milan
Marketing Team