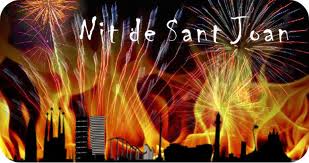 “Sant Joan” (in Catalan) is also known as “San Juan” or, incorrectly, as “San Joan”. This refers to the summer solstice on the 23rd of June. Those from more wintry climes may be surprised to discover that, in hotter countries such as Spain and Portugal, this overtakes New Year’s Eve in the competition for biggest party of the year.

Sant Joan in Barcelona has numerous traditions associated to it. The most obvious themes for this startingly pagan affair, however, are fire (in the form of communal bonfires and fireworks) and noise.

Despite being somewhat overwhelming for newcomers, Sant Joan in Barcelona is a celebration of epic proportions, given added credibility by the years of history behind it. Where else in the world is it permissible for special teams of flame-proofed, highly-trained participants to dress up as devils and run around shooting fireworks at each other? Needless to say, small children, animals and the faint-hearted should be kept out of the main streets.

The most popular activity on the night of Sant Joan in Barcelona is generally to head down to the Barceloneta beach, where electro music thuds out all night from ‘chiringuitos’ (beach bars). If that’s not your scene, however, there’s plenty more activities going on in Barcelona that have more years of tradition attached to them. There are local celebrations going on all over the city (see PDF); here are some of the biggest.

– The Flama del Canigó (something like the Olympic torch, used for lighting all the bonfires in the city) is brought down (from the Pyrenees) to the Plaça de Sant Jaume at 7.30pm. It’s accompanied by parades of papier-mâche giants, kings and queens, before the flame is sent off with specialised teams.

– Next, head over to the Plaça Reial, where Sant Joan 2012 will be celebrated along with the Barcelona Big Blues Band at 9pm.

– The more daring among us should then begin their passage down to the beach, where a “Night of Fire” will be celebrated in the Plaça de la Barceloneta at 9.30pm. Look out for fireworks, bonfires and flame-throwing devils.

– Always a good option for those avoiding the electro on the Barceloneta: in the Pg. Lluis Companys (just above the Ciutadella park and next to the Arc de Triomf), Sant Joan will be celebrated with capoeira shows and various music groups from 8.30pm until 2.30am.

– Tucked slightly out of the city centre in the Plaça del Sortidor, in the district of Sants/Montjuic, the arrival of the Flama del Canigó will be celebrated with an orchestra at 8.30pm. There’ll also be more devils (who doesn’t love a good devil) in the Cal Sèbio gardens at 9.30pm.