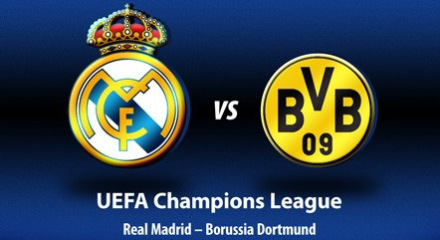 The question on every football fans lips is can Borussia Dortmund prevent Real Madrid from making it into the final of the Champions League 2013, thus ending Real’s hopes for a tenth European Cup. For Dortmund fans the answer is yes and of course for Real fans no. With the first leg only days away now is the time to start looking for accommodation in Madrid for the Champions League 2013 Semi-Final clash between Real Madrid and Borussia Dortmund in the Bernabeu on the 30th of April 2013.

Real Madrid seem a club possessed, everyone from president, Florentino Perez, down to the supporters have only one goal for this season, to lift the Champions League Trophy in Wembley this year. It seems they have the side to do it too. Cristiano Ronaldo, Benzema , Di Maria and Higuain form an attacking forward line who with their speed and ability can quickly undo even the most defensive side. Combined with the strong backline of Pepe, Ramos and new keeper Lopez, Madrid it would appear are unbeatable.

However in their two previous meetings Dortmund did just that, beat Real Madrid. The only team to do so in the group stages of the competition beating Madrid at home 2-1. In the match at the Bernabeu the result finished 2-2. Dortmund will be looking to repeat this success when they take on Madrid in the Semi-Final of the Champions League 2013. The defining characteristic of Dortmund’s game is the way they swarm around players in possession which will make it difficult for Real Madrid to mount an effective attack. With Hummels controlling the backline, Gótze orchestrating the midfield and goal scorers Lewandowski and Reus up front, this Dortmund side is capable of causing an upset in the Bernabeu.

The Champions League Semi-Final between Real Madrid and Borussia Dortmund promises to be one of the most tightly contested semi-finals in recent years. Where better to watch your team make history than the Santiago Bernabeu. If you are going to the match then it is time to start looking for your accommodation in Madrid, here at Friendly Rentals we have some great apartments close to the Bernabeu so you don’t miss any of the action surrounding this game.

Pals: A family holiday on the Costa Brava