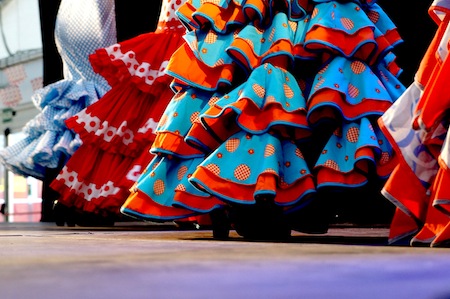 The scent of jasmine and orange blossom invade the streets of Seville, the days are getting longer and warmer and slowly the season changes from winter to spring. There is an air of anticipation and expectancy in the city of Seville as it is almost time for the celebrated April Fair, la Feria de Abril. This year the Seville April Fair will take place from the 20th to the 26th of April.

Every year thousands of Sevillanos, the women dressed in the typical figure hugging polka dot flamenco dress the men proudly wearing the traje corto, attend the Seville April Fair. The fair opens with the Portada, a giant gateway giving access to the fair and usually based on significant monument in Seville, being lit up in an official ceremony performed by the Mayor of Seville.The rest of the fairground is lit up section by section so it appears as a continual wave of light.

Once the opening is out of the way it is time to get down to the real business of the Seville April Fair, eating, dancing, drinking and parading up and down the illuminated streets. Most of the partying takes place in the casetas, privately owned marquees where Seville’s well to do families drink fino, dance Sevillanas and eat fried fish and other tapas.

Different events occur throughout the Seville April Fair, on the traditional Paseo de Caballos, men on horseback and whole families crammed into horse drawn carriages adorned with bells and other decorations parade up and down, unofficially competing aginst each other. Once they have paraded enough they make their way to the bullring, one of the most beautiful in Spain, to witness some of the best matadors test their bravery in front of the bulls during the afternoon bullfights.

Whilst the Seville April Fair is a traditional event there is something for the younger visitors in the Calle del Infierno, Hell Street, an enormous area dedicated to rides, shows, circus and souvenirs. A week after the lights have been turned on they are turned off, bringing to an end a week of partying. It is then the residents of Seville begin planning their outfits, casetas and dances for the next year’s April Fair.