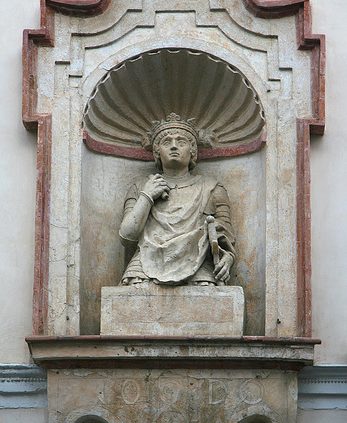 The Head of King Don Pedro

One of the myths tells the story of King Don Pedro of Castilla, also known the Cruel or the Just depending on whose side you were on, who decided to sample a bit of the Sevillian nightlife. It was during this nocturnal sojourn he came across one the Guzmans, a family who supported the King’s half brother Enrique de Trastámara in his attempts to occupy the throne. This encounter descended into a common street fight which ended in the death of Luis de Guzmán. As expected the Guzman family demanded justice, to placate them King Don Pedro promised them the head of the assassin. King Pedro ordered a wooden box be placed on the exact spot where the unfortunate Mr Guzmán lost his life assuring that the murderer’s head was inside. Soldiers were placed to protect the box should anyone try to open it.

Eight years later, in 1369, Pedro I died in Montiel at the hands of Enrique de Trastámara and one of his right hand men. The Guzman family upon taking control of Seville opened the box to identify their brother’s murderer. Imagine their surprise up on opening the box, instead of the rotten head they expected to find they found a marble bust of King Don Pedro. The marble bust can still be seen in the place it was uncovered.

Of course the story doesn’t finish there, because it was King Pedro who ultimately lost his head. According to some historians the head was stuck on a lance and paraded around the cities that still supported his cause. According to others it was grotesquely displayed on the battlements of Montiel Castle. It seems King Don Pedro was a man of his word.

Wandering around Seville you’ll come across this symbol on buildings, street furniture, man holes, pretty much everywhere. It’s a symbol of Seville but what does it mean?

According to legend it was King Alfonso X who came up with the design as a way of saying thanks to the city of Seville for standing by him when his son Sancho tried to overthrow him. The symbol when spoken translates as “No me ha dejado” which in Spanish means “he who didn’t leave me”. With the Sevillian accent its sounds like no-madeja-do. A madeja is a skien which is easily represented by the 8 symbol.

A crocodile in the Seville Cathedral

On the east side of the Patio of Oranges, the side that is closest to the Giralda, if you look up you’ll see a crocodile, an elephant tusk, a scepter and a horse’s bit which was actually used fora giraffe hanging from the ceiling. A strange collection of objects to exhibit in a cathedral…according to legend they came from the Nile during the 13th century, when an Egyptian Sultan sent an envoy laden with gifts to the kingdom of Alfonso X with the purpose of asking to wed the King’s daughter Berenguela. Among the gifts were a live crocodile and a domesticated giraffe.

The King declined the proposal but accepted the gifts. Apparently the giraffe and crocodile lived in the Alcázar. When the crocodile died it was stuffed and hung in the Patio of Oranges along with the rest of the gifts. Over time the crocodile rotted away and was replaced with the wooden one which can be seen in the cathedral today, known popularly as the ‘crocodile of the cathedral’. The fate of the giraffe is unknown.

That brings to a close the section of Myths and Legends of Seville for today. What is your favourite?