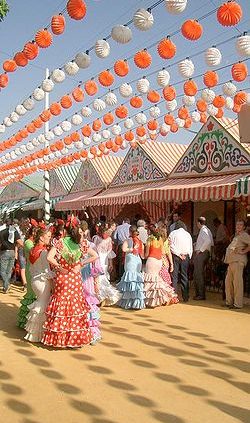 This year the famous and fabulous Feria de Abril in Seville, which needs no introduction, will be taking place from the 3rd to the 8th of May 2011. This comprises one of the largest celebrations in the Andalusian Capital and one of the greatest opportunities to experience real Andalusian culture and tradition, in addition to catch a glimpse of the city at its very best. All throughout the festival there will be singing, dancing, comedy, and some gorgeous flamenco dresses amongst many other activities and events, in addition to an overall fiesta, because if anyone knows how to party, it’s the Sevillians.

The Seville Spring Festival starts two weeks following Semana Santa (Holy Week) and is set up along the far banks of the Guadalvivir River (the Fair Ground is called the Real de la Feria) in the district of Los Remedios where it gets crowded with rows of casetas, canvas pavilions, and tents of varying sizes made of brightly-coloured canvas and decorated with thousands of paper lanterns. Some of these tents are private either belonging to families, groups of friends, clubs, trade associations, or political parties whilst the remaining ones are “open” or public ones with the main and largest one belonging to the City Hall. You can only gain access to private tents on invitation or if you work for the company etc. and although the Feria is open all day the party only really comes alive after 9 at night with an array of flamenco dancing, singing, and comedy acts etc. taking place until the early hours of the morning to then start all over again the next evening.

During the day the locals parade around on horseback or in carriages with their best Andalusian flamenco dresses and suits. You will actually see Sevillian families riding the streets in carriages with bells decorating the horses as well as this traditional mode of transport. There are also daily bullfights taking place in the afternoon, generally considered the best of the season as the Feria attracts the top matadors from all over Spain. The bullfights take place in the Plaza de Toros de Maestranza at 5:30, what is considered one of the most beautiful bull-rings in Spain. This kind of event isn’t everyone’s cup of tea however, if this is something that you think you would enjoy then you can purchase tickets at the bullring itself, although they can be quite expensive.

The Feria opening ceremony begins with the Gate (Portada) of the Feria being lit up by the City Hall. A different Portada is designed every year to commemorate some monument in the city of Seville and is quite stunning to see in the evening along with the festival lights illuminating the fair grounds. Alongside the Feria is “La Calle de Infierno” themepark usually consisting of a huge Ferris Wheel, in addition to all your usual attractions as well as food, sweets, candy floss, balloons and souvenirs to take home with you, which you can purchase any time as the stalls are open until quite late during the evening.

The locals take the Feria very seriously and dig out their best flamenco dresses and outfits for this exciting event so you can expect to see all the Sevillian women exquisitely dressed in their finest “traje de flamenco” whilst the men don the unique wide-brimmed “bolero” hats and short-cropped jackets typical of the region. These typical Andalusian dresses and accessories including fans, hairpieces (haircombs), scarf and castanets do not come cheap. In fact some people pay hundreds of euros for these heavy ruffled and frilled, bold colour, and embellished outfits but they’re worth it for the effect.

Finally, on Monday the first day of the Feria the locals traditionally eat “pescaíto” for “Lunes de Pescaíto” in the casetas then most make their way to the Portada to witness the light turning on ceremony (alumbrao) which takes place at midnight. Also, during this festive affair the locals typically drink “rebujito” comprising a combination of Manzanilla (camomile) wine and lemonade served in large jugs and small glasses. A word from the wise though, don’t be fooled, it is served in small glasses and it doesn’t appear to be strong, until you get up of course (speaking from experience), so take care especially with the heat in Seville and the fact that the casetas get very hot and crowded. The festival culminates with a castle of fireworks and an impressive firework display.

We sincerely suggest that you head down to the Seville Spring Festival if you are on holiday in the city this May as it is truly an experience and lots of fun. In addition, it’s a great opportunity to experience real Andalusian culture, try some authentic Sevillian food, and see the “Sevillana” danced live (flamenco-style dance typical of Seville) in a colourful and party event.

Dates: from the 3rd to the 8th of May

There is also a bus that leaves from the El Prado de San Sebastian bus station in the centre.