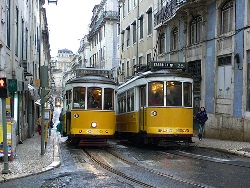 One of the best ways to discover the city of Lisbon in a day is to jump aboard one of the old trams that shake and rattle their way through the narrow streets. Relax and watch the magnificent architecture and history of Lisbon slide by, hop off and explore the neighbourhood whenyou want and when you’re ready, climb back on board and let the journey continue. Of all the trams in Lisbon which has captured the hearts of everyone who has stood on her rickety platform, Tram 28.

Departing from Martim Moniz, the No. 28 heads up through the Graça neighbourhood, passing the characteristic main Square and the Church of São Vicente de Fora.

Continuing through the historic Alfama neighbourhood, the tram takes you though some of the most picturesque sites in medieval Lisbon such as the steep Rua das Escolas Gerais and the Miradouro das Portas do Sol, which offers spectacular views of the Tagus River, São Jorge Castle and the entire Alfama neighbourhood.

Continue on down to the Baixa past the Se, with its austere Romanesque façade and the Church of Santo António. As you approach the Baixa along the busy Rua da Conceição, take a look at the impressive early 20th century facades.The tram again now embarks on an upward trajectory through to Chiado.

Along the entire route of Tram 28, make sure youdon’t miss the architecture and the beautiful tilework of the façades, often in an Art Nouveau style they cover the entire building from top to bottom.

An added bonus of doing some sightseeing on this famous yellow Lisbon tram is you get to see just a little of how the locals live. It is probably the most authentic and original way of sightseeing in Lisbon. Do yourself a favour and climb aboard!