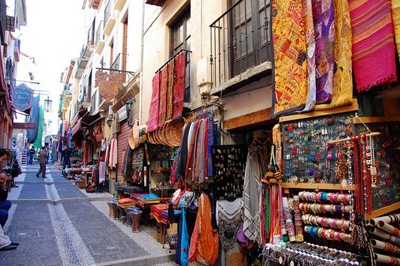 What do I buy in Granada? Discover the typical products, wander the markets, enjoy the colourful shops and take home a memory of the city in your suitcase, these are just some of the rituals that we travellers do when we visit a new city or destination. Granada is a great place to go shopping. Here are a few ideas of what to buy in Granada and the best places to do it.

The Typical Products of Granada In London you would probably buy a box of tea to drink on a rainy afternoon, Amsterdam it would be the tulips for your balcony, in Venice it would be a carnival mask and in Granada…what to buy in Granda?

Andalusia is a land of artisans and one of the specialities of the artisans of Granada is the taracea or marquetry.Taracea is an ancient technique which is used to decorate furniture, chests, cases and other objects made of wood. It consists of inlaying small geometric pieces of wood, nacre, ivory, silver and other materials to create a decorative mosaic. With its origins in the Middle East it was introduced to Spain with the Arabs. Ceramics are another strong point of the artisans in Granada, with the dominant style in technique and decoration being Nazarí. The most common type of ceramic in Granada is the Fajalauza, the characteristic green and tones used decorate plates, jugs and tiles.

Other typical products of Granada include jarapas, rugs made in Alpujarra, Spanish guitars both classical and flamencas and finally Granada lamps. The best zone to go shopping for typical artisanal products in Granada is Albaicín. You will find marquetry workshops and master guitar makers in the Cuesta de Gomerez. Around Plaza Nueva, the souk of Alcaicería and the streets of Calderería Vieja and the Calderería Nueva you can find natural cosmetic shops, hippy clothing, silver objects, North African tea sets and other Arabic influenced articles.

The centre of Granada is where the majority of clothes shops can be found. The Gran Via de Colon, Mesones, la Alhóndiga, Zacatín, Recogidas and Reyes Catolicas are some of the busiest streets.