Shrek the Musical has arrived in London for 2011 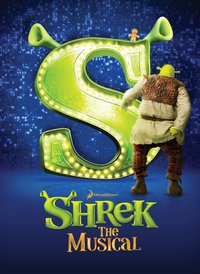 It’s been long awaited and let’s be honest it was bound to happen, but Shrek the Musical has finally arrived in London. This fabulous theatrical version of the film will be opening on the 6th of May 2011 for all you lucky Shrek fans and film fanatics out there in the Theatre Royal on Drury Lane, London.

Not to worry if you think the show will never top the film because so far it has received cracking reviews and has been a major success on Broadway. The all star cast consists of Amanda Holden playing Princess Fiona, Richard Blackwood as Donkey, Nigel Harwood as Lord Farquaad, and Nigel Lindsay playing the big bad Ogre himself.

Without a doubt you know how the story goes but just to refresh your memory our unlikely hero sets out with his loyal steed, Donkey to rescue the lovely Princess Fiona from her tower guarded by a fire breathing love-sick dragon with some unusual and unexpected results.

Put all this together with a further fabulous cast of Lord Farquaad, an evil lord with a SHORT temper, a gang of fairytale misfits, and a ginger biscuit with attitude then you have the new must see musical comedy of the year – Shrek the Musical.

This fabulous theatrical version of the film features all new songs as well as the cult Shrek anthem I’m a believer, and brings all the well loved characters from the Oscar®-winning DreamWorks Animation film. The world of fairytales is turned upside down in an all singing, all dancing, irresistible mix of adventure, laughter and romance where being unusual is nothing to be ashamed of, good conquers evil, and even the ugliest, grumpiest of ogres find true love and friendship.

So, given that the show starts in May that leaves you plenty of time to book an apartment in London with us and bag a ticket for this fairytale show with a twist!