Sitges Carnival 2013: Debauchery and Hedonism in the Streets of Sitges 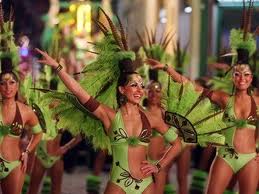 Sitges Carnival is here again, that one time of the year when anything goes, a week long celebration of hedonism and debauchery occurring this year from the 7th to the 14th of February in the streets of Sitges. The most famous of all Carnivals in Spain attracts visitors from all over the globe to watch and participate in the week long events which include the famous Debauchery and Extermination Parades.

Sitges Carnival 2013 begins with the arrival of King Carnestoltes and the Carnival Queen on Jueves Lardero (Fat Thursday) accamponied by a spectacular fireworks display occurring on the Sitges waterfront before marching up with their entourage to take possession of Sitges Town Hall, where they read the “predicot” a satirical speech poking fun at local identities and officially giving the citizens of Sitges permission to enjoy the wild festivities. After officially being opened the Sitges Carnival 2013 moves into top gear.

Xato competitions, a bed race and the Children’s parade all take place in the days before the Sitges Carnival 2103 main attractions, la Rua de la Disbauxa (Debauchery Parade) and la Rua de’l Extermini (Extermination Parade). As the names suggest these Parades occurring on the Sunday and Tuesday Nights of carnival are wild and crazy affairs, with the streets of Sitges filled to overflowing with more than 300,000 costumed party goers, dancing and gyrating in time to the music blaring from the more than 50 decorated floats, as they wind their way through the streets led by the scantily and extravagantly dressed participants.

Expect to see Drag Queens in impossibly high heels, sequins galore, masks and wigs of all kinds, elaborately decorated floats and spectacular choreographed dance routines requiring months of practice. It is a true celebration of Hedonism and Debauchery and needs to be seen to be believed.

Sitges Carnival 2013 comes to an end on Ash Wednesday with an effigy of King Carnestoltes being burnt on a bonfire and the subsequent reading of his will. Meanwhile the participants of this year’s Carnival, nursing sore heads from the previous night’s celebrations, are already planning the costumes and dance routines for next year’s carnival.