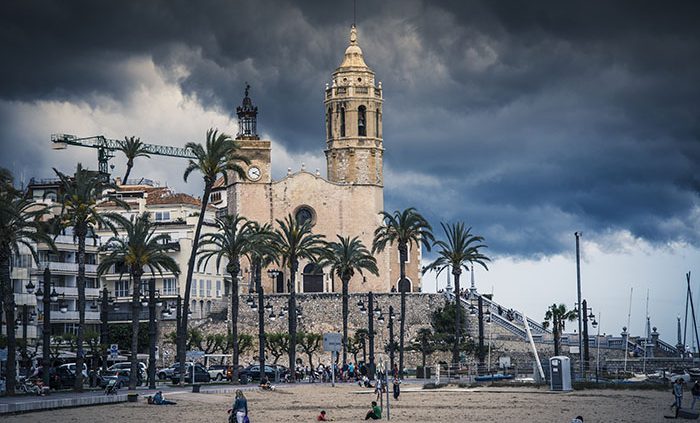 Celebrate the 50th anniversary of the Sitges Film Festival

From 5 to 15 October 2017 the lovely coastal town of Sitges welcomes the very best in fantasy and horror films. You can catch some great screenings, spot celebrities on the red carpet and take part in a whole range of parallel activities such as the famous Sitges Zombie Walk. Even the town’s restaurants will be whipping up special creations, and the hotels and apartments will be full to the rafters. If you want somewhere to stay in Sitges during festival week, get your skates on and enjoy the festival!

A groundbreaking festival for fantasy and horror films

The Festival Internacional de Cinema Fantàstic de Catalunya is the first festival dedicated to fantasy and horror films in the world. The first edition was held in 1968 as the Semana Internacional de Cine Fantástico y de Terror and it has been a big hit with film buffs ever since. Actors, directors and producers such as Quentin Tarantino, Cameron Diaz, Jodie Foster, Viggo Mortensen, Tony Curtis, Vanessa Redgrave and many more have strutted down the red carpet over the years. If you’re eager to find out who you can see this year, read on!

Everything awaiting you at this year’s edition

This year’s edition opens with Guillermo del Toro’s latest film, The Shape of Water, which won the Golden Lion in Venice this year. And to celebrate its 50th anniversary, the festival will welcome four major stars in person: Guillermo del Toro, Susan Sarandon, Dario Argento and William Friedkin.

But that’s not all! On 28 September the Prado cinema will be screening Aelita, the Soviet science fiction film that opened the festival in 1968. Check out all screenings for the 2017 Sitges Film Festival here.

If you like to keep up with the latest releases, you can see the world premiere of Campfire Creepers, the first virtual reality horror series, in 360º! Fans of Stranger Things are also in for a treat. The festival will present the second season and welcome two of its stars: this is your chance to see Millie Bobby Brown and Noah Schnapp in the flesh. The closing film will be Irish director Brian O’Malley’s gothic horror film The Lodgers. All sounds pretty irresistible, right?

Each year one of the most eagerly awaited activities of the Sitges Film Festival is the popular Zombie Walk.This year it will take place on 7 October and the starting pistol will be fired by none other than Guillermo del Toro himself. If you really want to look the part, head down to Sant Sebastià beach for a free makeup session. After the Zombie Walk, there will be an exclusive party for zombies at Cau Ferrat i Museu Maricel in Sitges.

And this year you can also catch some interesting exhibitions. The Centro Cultural Miramar is putting on ¡El cine es fantástico!, a show on the history of the festival and how fantasy and horror film has evolved. As you leave the Auditori Melià in Sitges you’ll find an exhibition on Dracula, this year’s leitmotif. The Estudi Vidal in Sitges is filling its walls with work by 15 painters who have paid tribute to the festival’s 50th anniversary with the exhibition Pintura Fantástica en Sitges. There will also be a Gastronomic Painting Contest and the Casa Bacardí will host the show Fotogramas Fantástico to mark the 70th anniversary of the mythical film magazine Fotogramas.

And don’t forget that restaurants across Sitges will be whipping up their own special creations during the festival, so make sure you try some out!