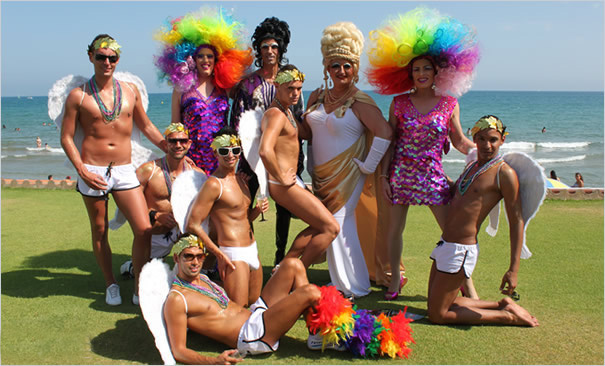 The dates for Sitges Pride have been officially set as the 5th to the 9th of July. The festival, then, is almost upon us. Festival organisers, however, are being particularly coquettish about revealing the Sitges Pride 2012 official programme. Due to various posts about “pushing authorities” and the current state of the Spanish economy, we wonder if Sitges Pride 2012 has been undergoing budget cuts. Unless by “authorities”, they were talking about the official Sitges Pride fire and police service…

Despite these comments, however, we have been able to glean certain amounts of information about the official Sitges Pride programme from our various sources. Here’s what we’ve been able to find out.

Things will officially start hotting up on Friday the 6th of July, where tribute band and legends in their own right 100% Kylie will be storming the stage. It may not be the devil you know exactly, but you certainly won’t be able to get it out of your head. Sitges Pride 2012 has also stated that “Lady G” makes up a part of the official programme (we suspect this is not the first Lady G that comes to mind, as she will be on tour in Australia).

On Saturday the 7th, the main Pride parade will take place. Normally held at about 6.30pm, with route going from the Av. Sofia, through Psg. Ribera and finally to the Psg. Maritim (crossing the Pride Stage and the Gay Beach on the way); we see no reason why this year would be any different. The parade normally takes about two hours. On the Saturday, expect loud and proud appreciation for act Abba Fever (gimme gimme gimme a man after midnight, anyone?). Vocal group Boney M will also be playing.

As every year, we can expect a pool party (Sitges Pride has promised it’ll be even bigger and better than ever), cocktail hours and a party in the park, as well as the official crowning of Mr Gay Pride Sitges and Miss Drag Queen Sitges. The Sitges Pride 2012 organisers are being tight with information about the official programme this year, but don’t let that put you off – given the huge success we’ve seen in previous years, it would take a lot to stop the spirited participants from once again taking the town of Sitges by storm. We’ve been promised more information soon, and you can keep updated here so you’re the first to know about it when it comes out.

If you can’t make it to Sitges, you might also want to check out gay pride events in larger cities like London and Paris this summer.

We leave you with a video from official sponsor ES Collection.