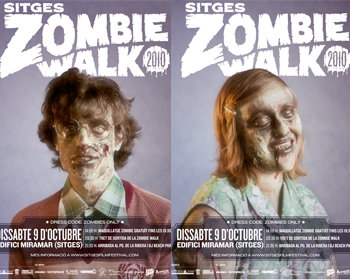 We have been informed that soon the 2010 Fantasy International Film Festival in Sitges will be kicking off. Between the 7th and the 17th of October one of the most important festivals in the world of horror films will be taking place, where top national and international films will be screened for the first time for the entertainment of the most demanding horror and fantasy film fanatics.

To bring a bit of realism to the equation and like every year, a strange manifestation with a terrifying touch will be taking place, which is none other than the Sitges Zombie Walks. This year zombie wannabes are being summoned on Saturday the 9th of October with a terrifying twist: the zombies will be delving deep into the intestines of the town, ready to eat the inhabitants! This horrifying march will begin its course from 20:30 at the Miramar building and a themed party taking place on the beach will follow. However, the most ardent film fans can continue participating in this fearful festival with the new zombie marathon in the Retiro Cinema starting at 1 in the morning, where they will be able to count on the encouragement of guests from the television: Berto and his zombie sitcom.

If you would like to be a zombie in the murderous march through the streets of Sitges and scare the habitants with your terrifying make-up, you can zombify yourself in the free make-up area in the Miramar building from 14:00 on the same day, Saturday the 9th of October, although we should warn you there are limited places.

And, if you happen to be in Lisbon this afternoon, the 30th of September, you will be able to participate in a zombie parade and wander the streets, as today is the annual Portuguese Zombie Walk, so watch out because there’s zombies about and you don’t want to be scared away by a group of zombie fanatics ready to scare passers-by in Lisbon.

Here is the Official Spot of the Sitges Zombie Walk 2010…. Simply terrifying!