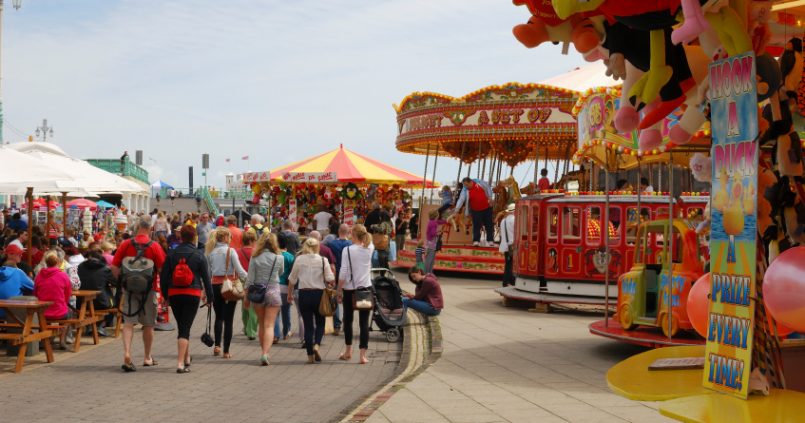 Staying at a London holiday rental apartment give you access not only to the UK’s historic capital city but to a huge variety of day trips to popular attractions outside the city. London has one of the best transport infrastructures anywhere in Europe and although often a little crowded in the capital it links visitors easily to rail services across the country. The city also has a large number of coach companies offering day trips by road taking advantage of an extensive motorway network to whisk you away for the day and deliver you back at your apartment comfortably and safely. Children aged under 11 can travel free on any of the city’s bus tram and underground services and holidays with toddlers UK wide are made easier with free travel for under-fives on the national rail network.

If your next family holiday will be based in London read on for our top four day trip suggestions:

HAMPTON COURT PALACE – This sprawling and beautiful royal palace has not been home to the British Royal Family for centuries. It has been a popular tourist attraction for many years and hosts its own music festival and flower show. The beautiful Fountain Court was designed by Sir Christopher Wren who was also responsible for Saint Paul’s Cathedral in London and is probably still England’s most well known architect despite having died nearly 300 years ago. As well as the palace tourists flock here to try and make their way through the celebrated maze in the palace gardens.

Trains to Hampton Court run every 30 minutes from London Waterloo railway station and the journey takes about 35 minutes to Hampton Court Station. Some tour companies also operate day trips that include both Windsor Castle and Hampton Court. Another option is to take the river boat from Westminster to Hampton Court – this is a real treat but because it takes three hours you will have less time to explore the palace.

LEGOLAND WINDSOR – Prides itself in giving children aged between 2 and 12 years old the time of their life. Rides and attractions have been developed with young imaginations in mind but its world class collection of rides make it fun for all the family. The amazing LEGO models around the park have been created using 55 million LEGO bricks and your fun day trip starts from the minute you get on the Hill Train down to the main park.

BRIGHTON – This is one of the most popular seaside destinations on the English south coast rather less for its shingle beach than for its history culture and shopping. A rather Bohemian destination popular with musicians artists and with a substantial LGBT community its seafront is typically English and landmarks include the Royal PavilionPalace Pier and the world’s oldest operating electric railway (built in 1883). Brighton is also home to England’s largest arts festival and one of Europe’s largest marinas.

Trains to Brighton Railway Station take a little over an hour and leave from both London Victoria or London Bridge railway stations – return tickets cost about £12.50. There are also regular bus services to Brighton from London’s Victoria Coach Station tickets can be a little cheaper by bus but the journey time can take over two hours.

JORVIK VIKING CENTRE – More than 17 million people have visited the Jorvik Viking Centre over the last 30 years making it one of the country’s most successful visitor attractions. Visitors can experience the Viking-Age in the centre’s reconstructed streets and can see the remains of the original Viking houses that inspired the attraction’s development. Adults and children alike love Jorvik’s life like reconstructions and a ride that treats you to the sights sounds and smells of everyday residents of Jorvik.