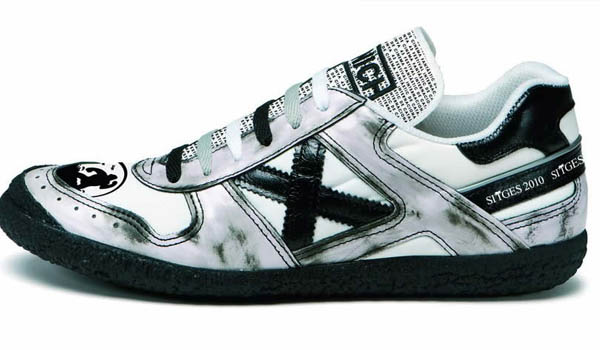 Do you remember our first edition of Brands of…..? We talked about brands in Barcelona and we mentioned two popular brands of shoes in this exciting city, Munichs and Maians. The first brand will be holding a special event in honour of the Sitges International Fantasy Film Festival and will be kicking off on the 7th of October and not only collaborating and sponsoring the event, but celebrating with a special edition.

The Catalan company has created a new pair of limited edition shoes inspired by the Fantasy Film Festival. These “Munich and Sitges Festival 2010” model shoes have been exclusively designed for the festival, and the team members will be modelling this new brand of shoes, as well as the press representatives, and actors that will be attending the festival. These new Munich shoes have been created based on the motifs and colours that represent the film festival. Thus, they are black and white, with a grubby look and bear the logo of the fantasy and terror films, dedicated to the film “The Shining” this year.

This is a unique opportunity for dedicated followers of the Barcelona brand, and horror film fanatics. With regards to the second brand, Maians have recently presented their 2010 Autumn/Winter collection that is characterised by wild prints that are very popular with other shoe collections at the moment for this season, which has just begun.

Thus, this Catalan company has presented a more daring collection with a combination of colours and textures cleverly inspired by the animal world. The prints on this collection recreate an authentic journey through the African savannah. Therefore, you can choose between zebra prints combined with different textures, leopard print, and even a brave combination of the two prints on the same model. Furthermore, they have presented the new collection in multiple versions and colours such as green, red, camel, and grey giving rise to some fun contrasts. The models for the winter season are los sisto, the most urban shoe of the collection, and the moccasin style boots like the model Tirso or Amador that is a version similar to the traditional British slipper, typical of the Victorian times.

Because the Munich and Maians Catalan companies are the most creative and modern, something which is demonstrated in the originality of their models and limited editions.