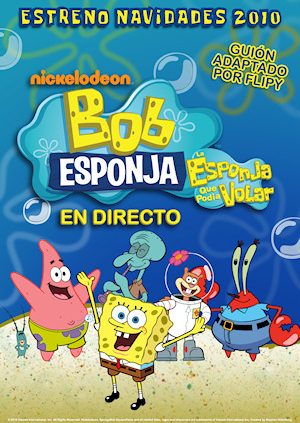 SpongeBob musical in Barcelona and Madrid this 2010

Fans of the children’s program SpongeBob SquarePants should be very excited as this mass icon, this cheeky but loveable Sponge called Bob, will be coming to the Spanish stages in the form of a musical in the cities of Barcelona, Madrid, and Bilbao. Thus, Madrid fans of SpongeBob and his friends will be able to enjoy his adventures on the 26th and 27th of December in the Arena in Madrid, in the Palau Sant Jordi in Barcelona which you can see on the 2nd and the 3rd of January 201l, and in Bilbao which will only be showing on the 8th of January.

The show, which is suitable for all the public, is based on one of episodes of the programme “the Sponge Who Could Fly”, a story of friendship and courage, where the underwater sponge seeks to fulfil his dream of flying with the jellyfish. The script was written by Steven Banks the programme’s usual writer, whilst the music which comprises a variety of styles worthy of the underwater sponge himself, was composed by Eban Schletter. Thus, you will be able to listen to themes ranging from Handal style chorus lines to songs from the Beach Boys, country, and even some more rock style tunes.

In the Spanish adaptation full of special effects, as well as entertaining songs and choreography, Spongebob will be accompanied by his friends in the Bikini Bottom, such as Patrick, the pink starfish and Bob’s best friend, as well as Squidward, a bald and grumpy squid, Mr Crab, owner of the Krusty Crab restaurant, Sandy Cheeks, a Texan squirrel, Larry the lobster, Mrs Puff, his driving teacher, and Patchy the Pirate, president of the SpongeBob SquarePants fan club.

A dozen of Spanish actors and actresses comprising the cast will be playing SpongeBob and his friends in this adventure that promises to entertain the smallest fans of the programme and their parents, as well as all those adults that follow the funny antics of these marine characters.

Posted in Madrid, Things to do in Madrid
Claudia