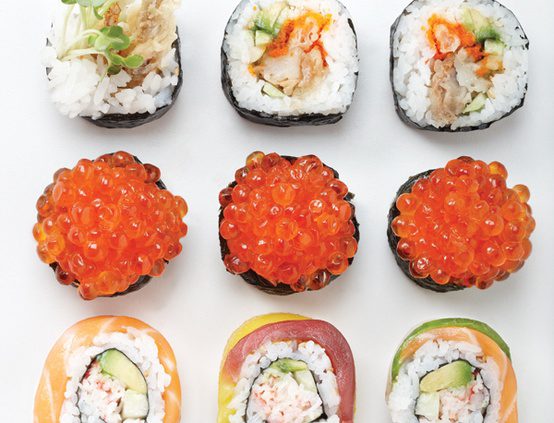 There was a time when all we wanted to do was brunch. The “gin tonic” craze rose and is still rising. Irish pubs have been around since the Wild Rover. But it’s time to move over, kids, there’s a new trend on the block, and it comes carefully wrapped in seaweed. Yes, we’re talking about the fashion for Japanese restaurants in Barcelona, which has taken the city by storm. So wasabi, shiitake, sashimi; sushi me up with a guide to sushi restaurants in Barcelona.

KOY SHUNKA – Master chef Hideki Matsuhisa has been learning the craft nearly all his life. Koy Shunka is rated as one of, if not the best, Japanese restaurant in Barcelona and one of the finest outside of Japan. We recommend eating at the bar, where you can watch the fascinating behind-the-scenes tricks of the trade. They say line chefs begin training hunting flies in the restaurant with a pair of chopsticks, but we think that’s just a rumour. Where: c/ de Copons, 7. When: closed on Mondays and Sunday evenings. How much: tasting menu €72.

DOBLE ZER00 – Awarded a Time Out prize for the best sushi in 2010, Doble Zer00 balances spinning plates of sushi with that most elusive of ratios: price and quality. Expect greater creativity and standards of hygiene than you’d find in your average, run-of-the-mill sushi restaurant in Barcelona. Mid-week set menu is particularly reasonably priced, and the kid’s corner* open every Saturday afternoon will make this a popular choice with mums and dads. Where: c/ de Jaume Giralt, 53. Also available to take away. When: closed on Monday daytime, and between 4 and 8 pm. How much: roughly €20 per head.

KIBUKA – Named after Kabuki theatre, this restaurant is indeed its own form of entertainment due to its loyal clientele of bright-eyed young things from the charming district of Gràcia. But don’t just come to this trendy venue to people-watch: substance as well as style make this a staple on the Barcelona sushi scene, and the restaurant has received glowing reviews from famous sources such as El País and La Vanguardia. Where: c/ Verdi, 64 and Goya, 9. Also available to take away. When: closed during August. How much: under €30 per head.

MIU SUSHI – Another winner on the price-quality front. A mid-week set lunch menu, including three dishes and dessert, will set you back a very reasonable €11. The restaurant is chic but not cold, and despite its location next to the central Passeig de Gràcia, Miu Sushi is not overrun with tourists. Where: c/ València, 249. Also available to take away. When: closed between 3.45 pm and 8.30 pm. How much: roughly €20 per head.

Prices are correct at time of writing; don’t hesitate to leave a comment below and let us know if they change!

Please note that we’ve used the phrase “Japanese restaurants” with a bit of flexibility: many of the dishes you’ll find in the above have a distinctly international flavour. There’s theories that the sushi craze has come to Barcelona from around the globe in Latin American countries like Brazil and Argentina, where it’s already well established, but ultimately, we can’t know where it’s originated from. All we know is that there’s only one place where all that sushi in Barcelona is going: into our mouths, stomachs and hearts. いただきます!