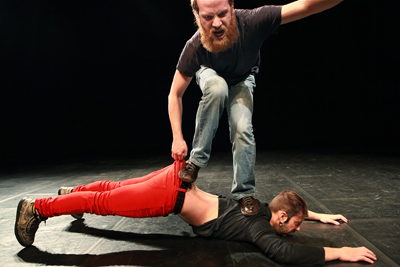 During summer the Berlin cultural scene has a wide range of offers for the visitors and inhabitants of the city. Among the numerous festivals and events taking place, a highlight is the International dance festival Tanz im August between the 19th August and the 3rd September 2010. In former editions this festival gathered a wide range of colourful international dance groups in an attempt to raise the controversy and admiration through the high quality performances carried out by these groups summoned by the organization of the festival.

This year we can enjoy the performance of dancers such as Pieter Ampe and Guilherme Garrido, who with their Stil Standing you, expect to give grounds for controversy and impress the spectators with their choreography reflecting the human relations.

In addition to that, we can also delight with the performance of artist such as Simona Aughterlony and Jorge León with their Deserve or Tanzcompagnie Rubato and Mahjong Dance with their Look at me, I’m Chinese or Héla Fattoumi and Eris Lamoureux with their Manta, among many other top international artists.

This program is expected to satisfy all dance lovers tastes in a festival completing the wide range of cultural offers abounding in the cultural scene of this summer in .