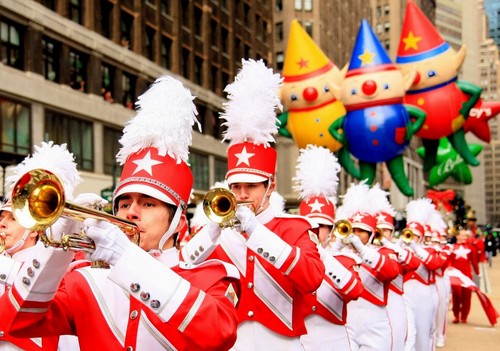 Family reunions, feasts, parades and more… Thanksgiving Day is one of the US’ greatest celebrations. This traditional event of religious origin is celebrated on the fourth Thursday of the month of November every year.

The first Thanksgiving Day in the US is normally considered to have been celebrated in 1621 in Plymouth, Massachusetts. Legend goes that the year before, a hundred-strong group of pilgrims coming from England arrived at the coast. That winter was hard, many died and others survived thanks to the help of the Wampanoag Indians. In autumn, the pilgrims organised a huge dinner to celebrate the harvest, and invited the Indians to thank them for their help.

In present day, Thanksgiving Day doesn’t only signal the end of the harvest, but also the beginning of the Christmas shopping season. The Thursday of Thanksgiving Day is a public holiday, and the shops are often closed, but the following day, popularly known as “Black Friday”, is when the sales begin, so get ready for the madness! The North Americans often celebrate Thanksgiving Day with a family reunion, in which stuffed, roasted turkey is traditionally served, accompanied by a cranberry and vegetable sauce. It’s been calculated that around 46 million turkeys are eaten in the United States on this day. To finish off the banquet, the most typical desserts are apple and pumpkin pies.

If, during these dates, you find yourself in New York and nobody’s invited you to dinner, don’t worry. You can always whip up a few quick turkey breasts in your apartment (unless, that is, you want to cook a whole turkey and spend several hours in the kitchen) or try the real thing in a restaurant which has a special Thanksgiving Day menu.

But not everything is about food. There are other things to do during Thanksgiving Day in New York. The most popular, and that which we most strongly recommend if you’re travelling as a family, is heading to the spectacular Thanksgiving Day Parade which is organised by the large department store Macy’s. It’s one of the city’s main events, and brings together millions of people every year.

The parade lasts around three hours, during which it struts through the streets of New York. There’s clowns, floats, music groups, performances, choreography… However, the main players of the Macy’s Thanksgiving Day Parade are the balloons and giant inflatable dolls which represent characters from popular cartoons such as Hello Kitty and SpongeBob SquarePants. Don’t miss it !