The 2009 Spanish Fiesta of San Isidro in Madrid 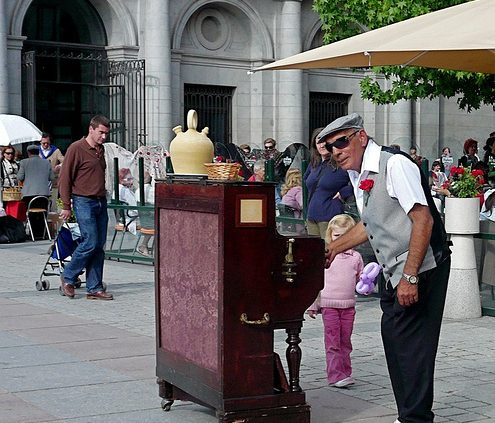 San Isidro is the Madrilian celebration of the capital’s patron saint, Isidore the Labourer.

In keeping with the origins of this far-from-subdued feast day, the city’s streets during this time are awash with thousands of devotees. Custom dictates that they gather at the Saint’s sanctuary – a fountain that gushes out holy water. How many actually do this is questionable – it’s common to skip the religious observance and get directly stuck into the programme of music, dance and performing arts.

The San Isidro feast day is 15 May, but celebrations spill over into the weeks before and after. Music dominates just about every street corner and public space. Spanish bands play traditional chotis, Latin American bands take to the stage at Las Vistillas and there is even a small jazz festival at Colegio San Evangelista, featuring blues as well as flamenco. A number of the city’s theatres also host music, while larger concerts of anything from rock to flamenco are held in the Plaza Mayor.

During the festivities, most barrios, or neighbourhoods, contribute to the gaiety with a performance of Castilian folklore and street parties. Look out for Madrid‘s equivalent of cockneys, or castizos, resplendent in their dog-tooth tweed and cloth caps and the women in their long frilly chulapas (skirts). Meanwhile, traditional fare consists of bitter aubergine, ice cream, buñuelos, doughnuts and steamy broth known as cocido.

It is also around this time that the bullfighting calendar starts. However, if that’s something you can’t stomach, try paying a visit to the Ceramics Fair and Book Fair. Be sure to take in as much of the city as possible, as there’s so much on offer. The main areas where activities take place are the Plaza Mayor, Plaza de las Vistillas, Plaza de las Comendadoras, Plaza de Felipe II, Parque del Retiro and the Centro Cultural de la Villa in the Jardines del Descubrimiento.