The Alcázar of Seville 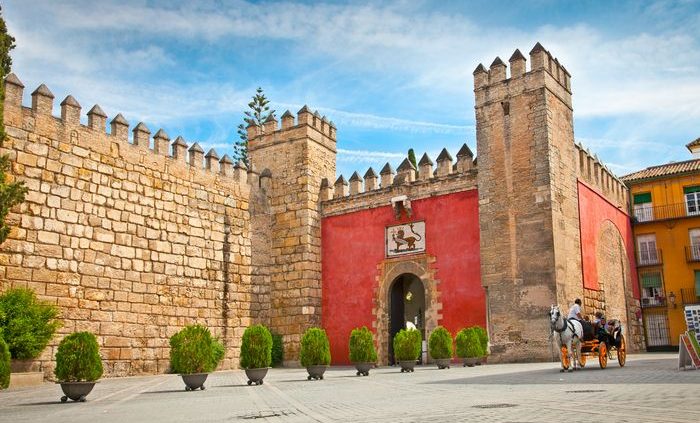 The Alcázar of Seville

The imposing door of Seville’s Royal Palace obscures a rosary of richly decorated rooms and refreshing gardens. Crossing its walls means going on a small journey through time… Are you coming with us?

The construction of the Alcázar of Seville began at the beginning of the 10th century, by order of the Muslim prince of Córdoba Abderramán III. Right from the start, the fortress included various buildings in which, in the fullness of time, Arab emirates and Christian kings added on rooms, walls, patios and gardens, combining different styles: Islamic, Gothic, Renaissance, Baroque… as if they were layers of plaster.

The Alcázar of Seville still serves as lodgings for the kings and heads of states who visit the city today, meaning it’s the oldest active Royal Palace in Europe. Its walls have been a loyal witness to important historical moments and setting of various films, among them Lawrence of Arabia, Kingdom of Heaven, 1942: Conquest of Paradise and in the TV series Game Of Thrones. They’re currently listed as a UNESCO Heritage Site.

The entrance to the Alcázar of Seville is through the Puerta de León, a door adorned with a tiled panel with the effigy of a lion. In its labyrinth of luxurious rooms decorated with arches, tiles, plasterwork and coffered ceilings, the following stand out:

The gardens of the Alcázar of Seville are another of the palace’s charms. They also mix various styles. Strolling through the oranges, palm trees and fountains is a trip to an oasis in the middle of the city. The most striking are the Jardines de Mercurio, presided over by a fountain dedicated to Roman God Mercury, behind which there’s a gallery which acts as a lookout point.

The Alcázar of Seville is an ensemble of great beauty, whose walls hold in numerous secrets and legends. If you’re travelling in summer, you can also enjoy the concerts organised each year in the series of Noches en los Jardines del Real Alcázar (“Nights in the Gardens of the Alcázar”).

Practical information for visiting the Alcázar of Seville