The Alhambra in Granada, the most popular site in Spain 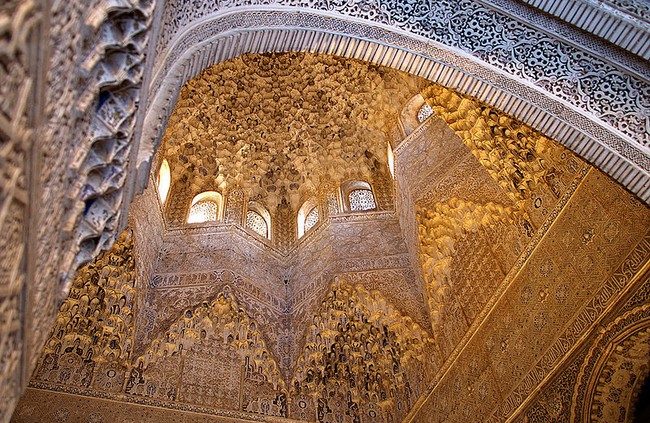 Alhambra means ‘red castle’ in Arabic. Although there are several different theories, this name probably comes from the reddish colour of its walls. It is strategically located on Sabika hill on the left bank of the River Darro, giving it excellent control over the whole city of Granada.

The Alhambra is an irregularly shaped walled complex that has been a palace, fortress and medina. Its richly decorated interiors are considered to be the height of Andalusian art. The most impressive ornamentation is found in the honeycombed domes in the Sala de los Abencerrajes and the Sala de las Dos Hermanas.

History of the Alhambra

The Alhambra dates back to the 9th century. It is first mentioned in reference to the civil war during the Caliphate of Córdoba, although there were probably already Roman buildings on the site. After the civil war, the capital of the caliphate moved to Granada, with the Ziri Taifa.

When Mohamed ben Al-Hamar, founder of the Nazarí dynasty, come to power in the 13th century, the Alhambra became a royal palace. During this period, the citadel was strengthened and new towers, storerooms and warehouses were built, as well as a mosque (now underneath the Church of Santa María) and the palace buildings. Most of the surviving Nazarí buildings in the Alhambra were built during the reigns of Yúsuf I and Mohamed V, in the 14th century, including the Puerta de la Justicia, Sala de la Barca, Cuarto de Comares and the famous Patio de los Leones.

In 1492, after the conquest of Granada by the Catholic Monarchs, the Alhambra became a Christian court. The major changes took place under Carlos V, when several historical buildings were demolished to build a new palace. During the 18th century, the Alhambra fell into disuse. During the Napoleonic occupation, the palaces were used as military barracks, and the French army blew up several towers when they left. In the late 19th century, artists and intellectuals called upon the government to restore the Alhambra. Since 1984 it has been a Unesco World Heritage Site. Visiting the Alhambra and buying tickets

There are several points to bear in mind when buying tickets for and visiting the Alhambra in Granada: