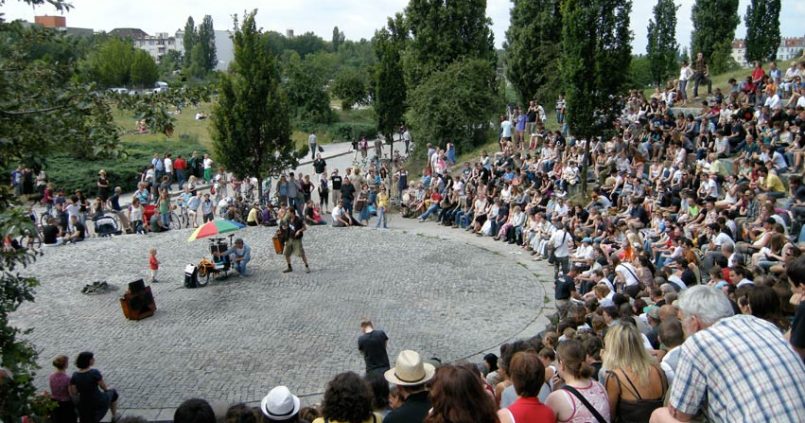 One of the most typical Berliner events and most unknown to the tourists during summertime takes place at the Mauerpark, in the Berliner district of Prenzlauerberg. Every Sunday, this singular and surprisingly unique karaoke is celebrated parallel to the flea market. We are talking about the Bearpit Karaoke, a classic for the Berliners, but a nice surprise for the visitors who don’t expect such an initiative, and even more in cold .

This karaoke gathers every week a huge group of free-and-easy young people eager to have a good time and enjoy the performance of spontaneous spectators who jump to the stage to show their music and performance skills. On Sunday afternoons 2,000 people meet at the stone amphitheatre in the Mauerpark in Prenzlauerberg.

This initiative came out on February 2009, when the Irish Joe Hatchiban (not his real name) played to a friend of his and his children on the in the snow. Since then it has grown into a local phenomenon regularly drawing crowds of 1500-2000 people. A weekly must see event for locals as well as tourists. The show takes place through the Autumn weather permitting generally between 1.30 pm and 5 pm every Sunday, although, this is generally confirmed on their Facebook page.

The idea is quite simple. There is a laptop computer full of karaoke songs, a small mixer, a microphone for the spontaneous spectators to give free rein to their talent and two very loud custom made speakers enough powerful to make people dance, acclaim and make them gather in communion to sing in chorus any classic song. However, during the show our Irish man will invite us to volunteer to his enterprise passing his cap, but honestly, if he has achieved to found a Sunday of sauciness and shamelessness in the German capital, some coins is the less we can contribute with!

A stunning musical experience only suitable for the cheeky that jump to the stage with nerve to fulfil their music dream, because everyone is invited to the Bearpit Karaoke. Hail to the musical democracy in its purest form at the Mauerpark in !

To have an idea of what really goes on there, here you have a video of some of the spontaneous performances.