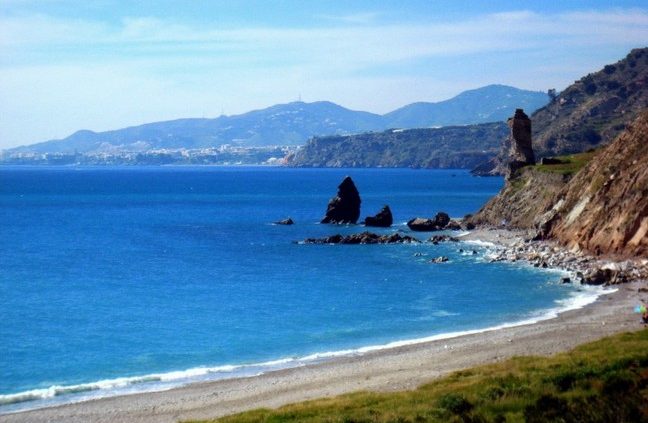 The best beaches in the Costa del Sol

Malaga is full of great beaches. With agreeably warm temperatures and bright sunshine which invites you to lie down in the sand and relax, it’s no surprise that the coast here is known as the Costa del Sol (“Coast of the Sun”). The beaches in Malaga are very varied: urban, isolated, with fine golden sand, rocky, nudist… meaning that everyone can easily find the beach that looks most like the beach of their dreams. In any case, to make choosing easier, we’ll let you know which are, for us, some of the best beaches in Malaga.

The best beaches in Nerja and La Herradura Nerja and La Herradura are in the eastern zone of the Malaga coast, in a stretch of shoreline full of cliffs and sculptured rocks. This zone forms part of the Natural Park of the Cliffs of Maro, and is home to many coves which have a wild feel and are surrounded by high stone walls . These beaches aren’t easily accessible, but are some of the best in Málaga if you’re looking to distance yourself from the crowds and sun umbrellas. Furthermore, their grottos and sea floors house a large quantity of flora and fauna, making this a diver’s paradise.

In this area, we particularly recommend Maro beach, and Burriana, Calahonda and Caleta beach, or (if you’re looking for a nudist dip), Arbequillas beach.

The best beaches in Malaga city

The city of Malaga has a total of 16 beaches. The most popular are the Malagueta, the Caleta, San Andrés and the Candado. These are also normally the fullest. As, in general, we all like lots of space to spread our towels out and cool off in the water, we would like to recommend some beaches in Málaga which have fewer facilities, but are also less occupied.

One of our favourite beaches is the Peñón del Cuervo beach, which has the special charm of a rocky crag which divides it in two. Another of the best beaches in Málaga is La Misericordia, which is in the outskirts of the city and more than a kilometre long.

The best beaches in Marbella and Estepona In the west of Malaga, you can find beaches which are famous all over the world. These include Torremolinos, Marbella and Estepona beaches. They’re very touristy places, and their beaches of fine sand are, in general, equipped with all kind of facility and striking leisure ports.
One of the best beaches in Marbella is Artola (also called “Cabopino”) beach. It’s an isolated beach, found on a system of fossilized sand dunes which are considered a natural monument. It’s a calm beach with a nudist zone, which also serves as a meeting point for surfers in the area. Other good beaches in the area are La Rada in Estepona, La Carihuela in Torremolinos and Santa Amalia in Fuengirola.