The best nudist beaches in the Costa Brava 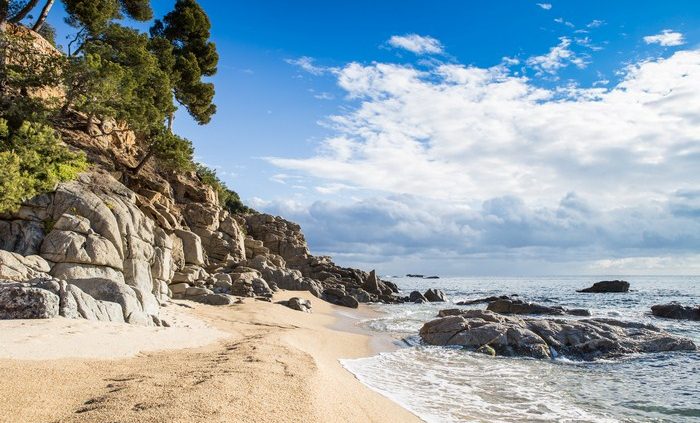 Nudist beaches in the Costa Brava

Nudism, a practise associated with environmentalism and the fight for freedom, is not a well-practised custom in Spain but is something that is becoming increasingly more popular. Although it is not common on the majority of the Catalan beaches, there are many little corners of the Mediterranean that for any naturist could be considered a paradise thanks to its welcoming and natural environment, an addition to the pleasant climate. Here, we have mentioned some areas located on the Costa Brava that are perfect for practising this kind of activity.

Nudist beaches in Cadaqués and Roses

The Cala Nans is the first beach on our list. It occupies the majority of the north side of the Cap de Creus, and is a small, untouched beach located far away from any city centre. It is a rocky beach that faces out to the North. It is a particularly good place to visit as it is exposed to hardly any noise and it is located in the wilderness that, similar the all the north of Cadaqués, has an abundance of small beaches and hilly areas for excursions. Cala Nans has a previously restored lighthouse that was built in 1874, and that is part of the heritage of this beautiful Cadaqués town.

In Roses you can find Cala Murtra, an entirely semicircular beach with sand and stone combination ground. Although there are more people living on this side of the Cap de Creus than the Cadaqués area, the Cala Murtra is located far away from any towns and main roads, thus you have access this area on foot. There are never many people around, not even in summer and partly for this reason it is a good location for scuba diving fanatics.

These two towns look out to the sea and have multiple rivers that thus form beaches when reaching the sea, especially in the East area. Cala Bona, for example, has two beaches with shallow and clear water, and it is a peaceful place comprising a rugged ground of earth and pine.

Cala Estreta, also located in Palamós, is a great place for launching yourself into and relaxing in translucent waters. It is accessed on foot and has rubbish bins and a small bar nearer to town.

Cala de Roques Planes is situated between Sant Antoni de Calonge and Platja d’Aro. It is smaller than aforementioned places, but it is located nearer to town centres and next to a residential area. The spectacular landscape includes prominent flat, round rocks, and an area of white beach.

Sharing the border with France, the foot of the mountains that makes cape Cervère form a small and desert style beach. La Playa del Pí is completely devoid of services, the ground is formed by boulders, and the water is completely transparent.

Cala Boadella is situated in Lloret de Mar, one of the only beaches with fine and medium sand. It is quite isolated and surrounded by pine trees, and it can get quite crowded for a typical nudist beach, although usually it’s quite a peaceful. There are showers available and a bar.

Finally, Sa Futadera located in Tossa de Mar is an area surrounded by cliffs and thick sand, and it is bordered by an abundance of vegetation. Although it is difficult to access by stairs, whoever makes it there will truly appreciate the charm of this untouched area with clean water, located near a tourist area.