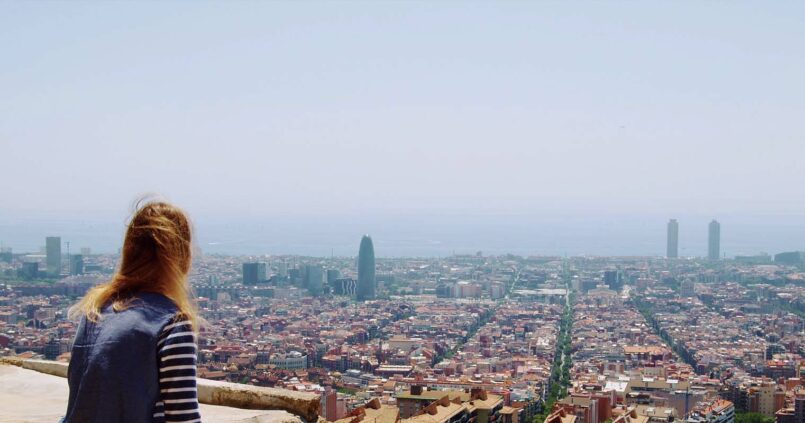 The top vantage points in Barcelona

Whichever way you look at it, Barcelona is a beautiful city. But there’s nothing like getting a great view of it on a clear day. Especially if you want to take a photo! From a good vantage point you can clearly see the gridiron Eixample set against the old, twisting streets of the old city centre. Here’s a list of the top viewpoints in Barcelona.

Perched on top of Turó de la Rovira, the Carmel bunkers were little known until a few years ago, but they’ve become more and more popular with young people and tourists, especially at sunset. The bunkers and anti-aircraft batteries were built in 1937, during the Spanish civil war, to protect the city from bombing raids. You’ll get stunning views over almost the whole city.

At over 500 m above sea level, Tibidabo is the highest peak in the Collserola range, with several great vantage points over the city. It is also home to a funfair and the Church of the Sacred Heart. At night, you can see the lights of the big wheel and the church from anywhere in the city.
The nearby 288 m high Collserola Tower was designed by Norman Foster for the 1992 Olympic Games and boasts panoramic views over the whole city, making it easy to pick out all the main sights.

At the foot of Tibidabo, at the entrance to Collserola Park, Sarrià has another well-known viewpoint. You can get there on foot, by funicular railway or by car, along the winding road to Vallvidrera. From here you can see Camp Nou, the port, the Agbar Tower and most of the city, especially the westernmost areas.

Montjuïc is home to several vantage points, including Montjuïc Castle and Miramar Gardens, with views over Barceloneta, the old city centre and the port. Our favourite spot, though, is the Mirador del Migdia, which shows you a less well known side of Barcelona: the port, Montjuïc cemetery and Zona Franca, with its piles of shipping containers. This may not be what springs to mind when you think of Barcelona, but it has its own charm.

At the foot of Montjuïc, MNAC also boasts great views. Tourists flock here, especially in summer, to sit out in the sun and enjoy the views. What most people don’t know, though, is that you can go up to the museum’s rooftop terrace (you have to pay €2) to get an even better view of Plaça d’Espanya, Collserola, the Sagrada Família and the port.

The rooftop terrace at Las Arenas shopping centre, housed in a former bullring, might not be the most spectacular vantage point in the city, but you can go up in a lift and it boasts good views over Montjuïc, Plaça d’Espanya and the Museu Nacional d’Art de Catalunya (MNAC).

Park Güell is still a must for all visitors to Barcelona. Laid out by Antoni Gaudí, it combines natural vegetation with creative embellishments and buildings covered by brightly coloured tiles. From the wavy benches you can see the whole coastline, as well as the Mapfre Tower and the Sagrada Família. Slightly higher up is the Tres Creus viewpoint, with even more spectacular views.