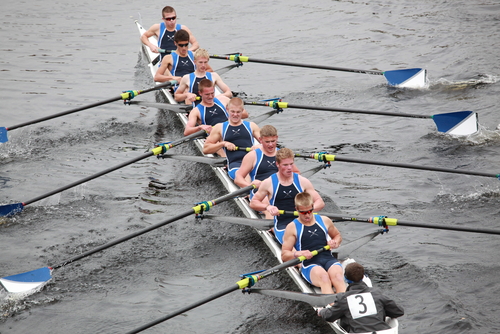 Oxford and Cambridge fight for honours in The Boat Race

It is no secret that the English love tradition, gentlemanly sports and a bitter rivalry between two opposing teams. One event which combines these three elements is The Boat Race between Oxford and Cambridge Universities, raced every year between Putney and Mortlake on the River Thames. This year it will take place on the 27th of March 2016.

The idea of the race came about in 1829 when two old school friends Charles Merivale, who was studying at Cambridge and Charles Wordsworth a student at Oxford, challenged each other to a boat race. Thus the idea of The Boat Race was born; a letter was written stating “that the University of Cambridge hereby challenge the University of Oxford to row a match at or near London, each in an eight-oared boat during the ensuing Easter vacation”. The first Boat Race was eventually held on the 10th of June 1829, with Oxford winning the race easily.

Since then both Universities have competed almost every year for the honours of being the first boat across the line, currently Cambridge has won the Men’s Boat Race 81 times to Oxfords 79 and also gains in the Women’s Boat Race with 41 victories to Oxfords 29. The tradition demands the losing team challenges the winner to a rematch.

The Boat Race attracts almost a quarter of a million people who line the banks of the Thames to watch this great sporting rivalry between these two great Universities, there are numerous vantage points along the River Bank such as Putney, Hammersmith, Barnes and Chiswick. Why not join the crowds of English as they flock to the Thames River bank to celebrate this unique sporting event and while your at it why not discover some of what London has to offer from the sights, the museums, the markets or discover the taste of some delicious fish and chips.

Will it be Cambridge who has to challenge Oxford to a rematch in the Boat race this year or vice versa?