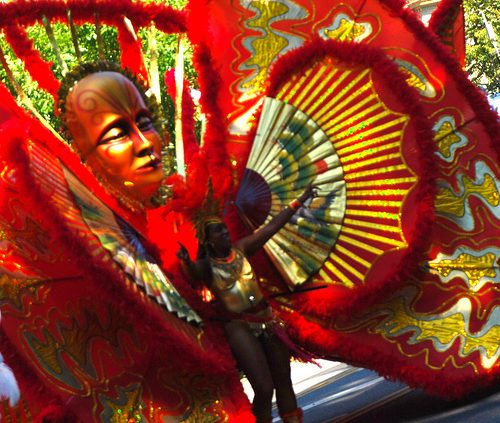 Known first and foremost for its Labor Day Parade, the West Indian Carnival in Brooklyn is one of the largest Caribbean Carnivals in the world, with up to 3 million participants each year.

Once again, the unstoppable force of the Carnival is back to pound the streets of Brooklyn with elaborate costumes, steel pans, heart-warming food and an inexorable sense of fun, with the Brooklyn West Indian Carnival 2012 held from August 30th to September 3rd (the famous Labor Day Parade will be on Monday 3rd).

The West Indian Parade in New York originally started off life in the ballrooms of Harlem. Its gigantesque costumes and need for space meant it soon escaped these confines and was transformed into an outdoor event. Some things don’t change, however, and to this day of crucial importance to the West Indian Carnival 2012 are music (calypso is king – a type of music closely related with the steel drums, known for its improvised, topical and often humorous lyrics) and “Mas”. “Mas”, which derives from the word “masquerade”, is the term used to refer to the incredible costumes that are created in honour of the event. Mas is often created by entire communities, and intense labour and skill is reflected in productions which are genuine works of art rather than just party clothes.

The programme of the Brooklyn West Indian Carnival 2012 includes events such as a kiddies carnival, concerts and orchestras. The crowning of the Carnival King and Queen, as well as the Carnival Monarch (best singer) will take place during Dimanche Gras on Sunday night. The Labor Day Parade will kick off on the Monday at 2 am with “J’Ouvert”, (or “daybreak”), a celebration in the Grand Army Plaza in which people throw paint at each other. Officially, the Brooklyn Labor Day Parade 2012 begins at 11 am, on the corner of Rochester/Eastern Parkway. A more complete scheme of events can be found on the official site.

Feeling hungry along the way? No worries, there’ll be a load of tasty Carribean-style food on offer, including everything from Jamaican Jerk Chicken to Bajan Fried Flying Fish. What more excuse do you need?