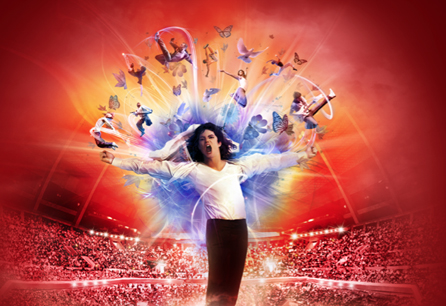 ‘Michael Jackson, the Immortal World Tour’ comes to Europe this 2012

Just as we thought the Cirque du Soleil didn’t have any more surprises for us, the Canadian company is back to pull a new trick out of the top hat in a performance which pays tribute to Michael Jackson.
‘Michael Jackson, the Immortal World Tour’, the new arm of the most famous circus troupe in the world, has kissy arrived in Europe after their highly successful tour in the US. With more dance and less acrobatics than other Cirque du Soleil spectacles, this performance is designed to take you though the artistic career of the King of Pop.
The energetic music of Micahel Jackson will be brought back to live on the stage, with more than sixty performers. Music, dance, fantasy, acrobatics, powerful visual effects, cult costumes and more than 32 Michael Jackson songs will lead the way to discovering the interior life of the artist.

‘Michael Jackson, the Immortal World Tour‘ is the first Cirque du Soleil show which boasts the collaboration of Jamie King. This prestigious choreographer and creative director has managed tours from huge stars, such as Madonna, Rihanna, Britney Spears, George Michael, Prince and Shakira. He even worked with Michael Jackson himself at the beginning of his career.
This Cirque du Soleil Michael Jackson tribute performance will be on show during the coming months in various European cities. A night to the beats of “Thriller”, “Beat it” or “Billie Jean” could be the icing on the cake of a great winter holiday.

To see the complete tour dates, take a look at the oficial webpage of the Cirque du Soleil. The performance will last around 90 minutes, and entrance prices oscilate between €40 and €120, depending on seats and cities.
Laura – Equipo de Marketing