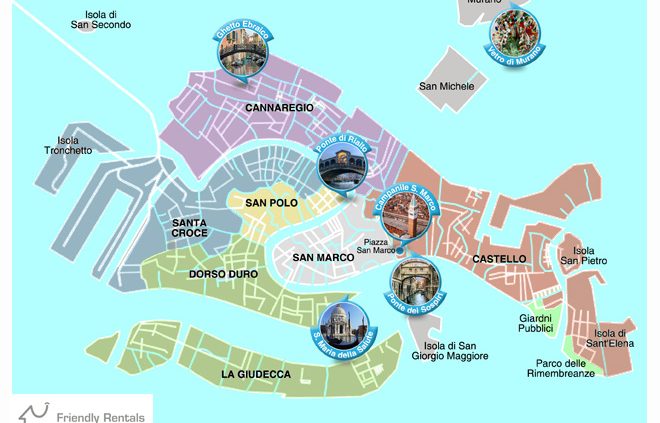 Everything you need to know about each district in Venice

You’ll have heard all about the hundred islands that Venice is built upon, not to mention its bridges, gondolas and Carnival. But you might not know quite as much about its different districts. Venice is divided into six neighbourhoods, or sestieri as they’re called in La Serenissima, each with their own personality. It’s worth finding out a bit more about them before booking your accommodation in Venice.

Venice Areas: San Marco, the heart of the city

The district of San Marco has been the city’s centre of political and legislative power since the early days of the Republic. It’s the first place tourists head for when they arrive. This is where you’ll find most of the famous sights in the city: St Mark’s Basilica, the Doge’s Palace, the bell tower and clock tower, the Bridge of Sighs, La Fenice opera house. It’s amazing how much history can fit into such a small place!

St Mark’s Square is surrounded by a maze of charming narrow streets. If you’re here for several days, you can also explore its other lesser-known sights, including the Fortuny Museum, Archaeological Museum, Correr Museum, San Salvatore church, Marciano Museum and the Grassi Palace.

The Island of San Giorgio Maggiore, over the water, also belongs to the San Marco district. If you’re looking for a spot of peace and quiet away from the hustle and bustle and with great views over the city centre, hop over there on a vaporetto.

San Marco is one of the most expensive districts in Venice for eating and drinking. However, some of the establishments in the area, especially those in St Mark’s Square, have a long history. If you fancy treating yourself, head for Harry’s Bar, Café Florian and Café Quadri.

Cross the Grand Canal over to San Polo, the city’s smallest but liveliest neighbourhood, with plenty of shops, restaurants and bars.

The star of the show is the Rialto Bridge, and the city’s main market, the Rialto Market, is right next door. In Campo San Polo, the neighbourhood’s hub, there are a number of decent, and more or less reasonably priced restaurants, as well as the dark San Polo church. Another church in the area worth a visit is San Giacomo de Rialto, said to be the oldest church in the city.

If you like art, San Polo is also home to the Scuola Grande di San Rocco, with an impressive art collection, including works by Tintoretto.

In east Venice, Castello is the biggest sestiere in Venice, with lots of different atmospheres, tourist attractions and gardens, as well as residential areas.

Its name comes from the 8th-century fortress on what is now the Island of San Pietro. You can reach it by crossing several bridges. The church was Venice’s cathedral until San Marco become the religious centre of the city.

Much of the neighbourhood is taken up by a large 12th-century shipyard, known as the Arsenale. This is where the great Venetian fleet was built: the terror of the Mediterranean. It now houses the Naval Museum. Other historical buildings include the Basilica dei Santi Giovanni e Paolo, with stunning interior decor. The Scuola San Giorgio degli Schiavoni and Santa Apolonia Monastery are also worth a visit.

If you feel like a stroll, head for the Giardini Pubblici, a welcome green space in the city. This is one of the areas where the Biennale is held.

Dorsoduro, in the southeast, is the most bohemian area in the city. This quiet neighbourhood is home to artists and students and also includes the Island of Giudecca. Dorsoduro boasts lots of 18th-century buildings and has a certain nostalgic air.

There’s plenty to see in Dorsoduro. The Accademia is the city’s main art gallery, with a wonderful collection including paintings by Giorgione, Canaletto, Titian, Tiepolo and Mantegna, among others. If you’re looking for something more modern, head for the Peggy Guggenheim Collection, with 20th-century avant-garde art. It’s also worth visiting Ca’ Rezzonico Palace, with mainly 18th-century pieces. The main church is Santa Maria della Salute.

This sestiere is great for strolling around. The centre of all the action is Campo Santa Margherita, with children, markets and bars. Its student atmosphere makes it one of the best places to go out at night in Venice.

Cannaregio, in North Venice, is often overshadowed by other neighborhoods. This quiet neighbourhood is a world away from the hordes of selfie-stick-wielding tourists in the city centre. Cannaregio is a humble area, with narrow streets, bars and artesian workshops that give you an idea of the real Venice.

Cannaregio is most famous for its ghetto ebraico, the oldest Jewish Quarter in the world. The Museo Ebraico is packed with information on this area, which appears in Shakespeare’s The Merchant of Venice.

The churches here include the Madonna dell’Orto, a lovely Gothic church full of paintings by Tintoretto. The church of Santa Maria dei Miracoli is a perfect example of Renaissance marble building. The most popular sight is the Ca’ d’Oro Palace, on the Grand Canal, which is now a museum and home to the Giorgio Franchetti Gallery.

Campo dei Mori has some striking statues of merchants, and the Sacca della Misericordia inlet boasts great views over the islands of San Michele and Murano. Head for the vaporetto stop at Fondamenta Nove for boats to the other islands in the lagoon.

The Districts of Venice: Santa Croce, the crossroads

Santa Croce, home to the bus station, is the only part of Venice open to cars. Let’s be honest: when it comes to sights, Santa Croce can’t hope to compete with the other districts. But if you’re here for a few days, it’s worth taking the time to discover its hidden secrets.

One of the most interesting things to see in Santa Croce is San Giacomo dell’Orio Square. Fashion fans should head for the Mocenigo Palace, with an impressive collection of 18th-century costumes that paint a picture of what life was like for the nobility and aristocracy of the time.

The Natural History Museum is in the Fondaco dei Turchi, with a charming front on the Grand Canal, as well as the Modern Art Gallery and Ca’ Pesaro Museum of Oriental Art.

One of the advantages of Santa Croce is that it’s much cheaper for going out at night. The streets are quieter than in other districts like Dorsoduro, but then you can suddenly come across small squares full of life.