The Definitive Guide to Montmartre 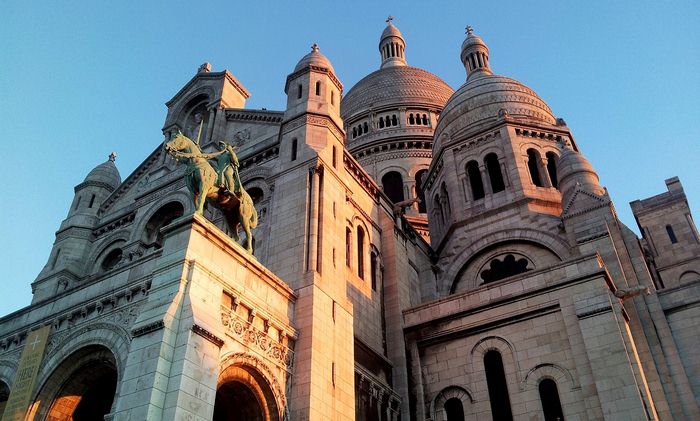 Montmartre in film and history

Moulin Rouge, Amélie, La Vie en rose… Probably no other neighbourhood in Paris has been the setting for (and star of) so many films as Montmartre. It has appeared on the big screen so often that you might be mistaken for thinking it was merely a set for tourists to stroll through. But no, Montmartre is a charming, atmospheric real-life neighbourhood full of history.

Montmartre acquired a bad reputation because of the large number of cabarets and brothels there at the end of the 19th century. It was also a modern neighbourhood that attracted lots of artists and intellectuals of the time, including Monet, Picasso, Renoir, Degas, Buñuel, Rimbaud, Hemingway and Satie, as reflected in Woody Allen’s magical Midnight in Paris.

If you want to discover the lesser-known side to Montmartre, head down the hill behind the Sacré-Cœur Basilica, put away your map and lose yourself in the charming streets, small cafes and neighbourhood life.

What to see in Montmartre, the most bohemian neighbourhood in Paris

SACRÉ-CŒUR. The Sacré-Cœur Basilica is the most emblematic building in Montmartre and was finished in 1914. Perched high on a hill, it can be seen from almost anywhere in the city. It is said it was built there so people would know God was always watching them. You can climb up the stairs or take the funicular railway on one side of the gardens.

PLACE DU TERTRE. Also known as Painters’ Square, because there are always artists exhibiting their paintings of Paris or painting portraits or caricatures of tourists. It’s bustling with atmosphere and there are lots of pavement cafes and restaurants.

RUE DE L’OLIVE. This small shopping street hidden between the tramlines is a great place to stop for a coffee. The former livestock market now sells cheese, sausages, fruit and vegetables.

JE T’AIME WALL. Next to Place des Abbenses there is a small park with one of the strangest places in Paris: the Je t’aime wall, by Frédéric Baron and Claire Kito, a giant mural of tiles with the sentence Je t’aime written in masses of different languages.

CLOS MONTMARTRE. Wine has always been one of the delights of this neighbourhood. There have been vineyards here since the late 10th century, although now they only cover 1,500 m2 (the only ones left in Paris) and add a dash of colour to the neighbourhood. During the harvest festivities each autumn, you can help pick the grapes, take part in the tasting workshops and buy wine at auction.

MOULIN DE LA GALETTE. In times gone by there were hundreds of windmills in Montmartre. Today this is one of only three left standing. It’s not as famous as the one at Moulin Rouge, but it was also immortalised in paintings by Toulouse-Lautrec, Casas and Van Gogh when it was a famous cabaret. It’s now a restaurant. Nearby, but less visible, you’ll find the Radet.

BOULEVARD CLICHY AND PLACE PIGALLE. Heading down the Boulevard de Clichy until you get to the lower end of Montmartre and Place Pigalle, you’ll come across a series of neon lights announcing stripteases and sex shops, conjuring up a modern version of those nights when cabarets and bohemian artists were all the rage. The famous Moulin Rouge is here.

MOULIN ROUGE. Built in 1889, the Moulin Rouge is a legend in itself. It made a name for itself for its parties where the champagne flowed freely as cancan dancers performed the shows captured in Toulouse-Lautrec’s paintings. It still puts on variety shows you can watch over dinner.

RUE DAMRÉMONT. As its name indicates, this is the “street behind the hill”. It is full of delightful florists and small shops that give it a charm of its own, such as the Chez Virginie cheese shop. It’s a lovely place to take a stroll. Out of interest, the famous politician Toulouse-Lautrec was born at No. 53.

LA RECYCLERIE. Inside the old Gare Ornano railway station you’ll find an unexpected bar. As you might imagine from its name, La Recyclerie is proud of its green credentials. As well as its menu, you’ll also find recycled materials, flea markets, DIY workshops, a city garden and a whole host of activities.