The Festival of Corpus Christi in Granada this June 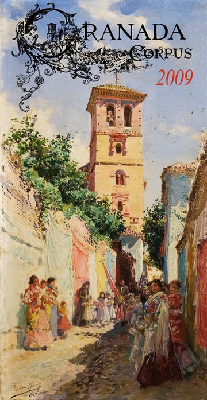 The Festival of Corpus Christi in Granada this 2011

Just like every year the locals in Granada will be celebrating their Festival of Corpus Christi 2011. Comprising the city’s most important celebrations, this year’s events will be held from the 20th to the 26th of June. On the 20th of June at midnight, they will be kicking off the celebrations with the lighting up ceremony, which consists of turning on thousands of lights on the gate and concluding the festivities the following Sunday with an impressive firework display.

The city of the Alhambra has been celebrating Corpus Christi on an annual basis for more than 500 years now following the Reconquest of Spanish territory by the Catholic Kings. In addition, a series of very traditional activities will be taking place alongside this highly religious event such as bullfights which allure the top international matadors on the bullfighting scene to Granada.

During the Festival of Corpus Christ there are daytime and night time celebrations. During the day the midday festival takes place and the most traditional festival-goers turn up at the fairground donning typical flamenco dresses and riding around in horses and carriages. In the evening, there is an abundance of casetas and tents set up with the most traditional Granada music playing inside, as well as more mainstream music for younger festival-goers.

Either way, all the casetas are public so choose carefully, although in general those open to everyone are usually the ones with the most people and with the liveliest atmosphere.

La Tarasca and the Feast of Corpus Christi

There are two particularly important events during these festivities that attract the attention of the locals. Mid-morning on Wednesday the Tarasca, a mannequin that supposedly sports what will be the latest in fashion for that season, parades around the city on the back of a fiery dragon that appears to be completely at his mercy. Thus, initially everyone will be looking at the modern apparel worn by the mannequin.

The Feast of Corpus Christi is celebrated on the Thursday. This is when everyone gets dressed up to attend the procession bearing the same name and which is characterised by a throne created by Granada silversmith and sculptor Miguel Moreno. In Plaza de la Bibrambla “Carocas” are exhibited, comprising related drawings and verses with a satirical tone that make reference to events that have occurred in the city the previous year.

To fully enjoy the Corpus Christi Festival and all the related religious events and celebrations there is nothing better than staying in an apartment in Granada located in the heart of the city. You are guaranteed to enjoy a well deserved break out of the way of the noisy fairground and be able to wander around this marvellous city of the Alhambra at your leisure. Here is a map indicating the exact location of the fairground in Granada.