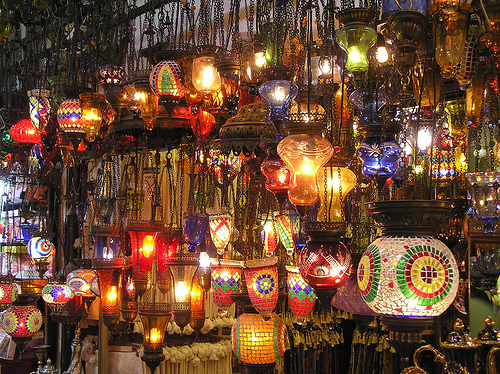 Going shopping in the Grand Bazaar in Istanbul

Hand-painted ceramics, jewels, antiques, carpets (might any of them be magic?), coloured lamps, the scent of spices and leather, the rumble of the stallkeeper’s conversations… the Grand Bazaar of Istanbul is one of those incredible places which makes you feel as if you’d walked into a tale from the Thousand and One Nights.
The Grand Bazaar of Istanbul (‘Kapalıçarşı’ in Turkish) is one of the oldest, largest markets in the world. Situated in the centre of the old town, its interior contains around 5,000 stands spread over 64 streets and 16 patios. All of which makes it a paradise for shopaholics: not even Ali Baba’s cave could compete.

This spectacular market began construction in 1,455, in the time of the Sultan Mehmed II. It quickly became an important centre of commerce. Around the initial building, shops and workshops began to spring up which, little by little, created a labyrinth of pathways. With the passage of time, the streets were covered and the centre’s walls built.
Although the Grand Bazaar might seem like a chaotic place when you’re looking for the lamp of your dreams among corridors and corridors crammed full of products, in reality legacy from the ancient guilds means that the majority of the stands are grouped together according to the products they sell. In its interior, there’s also some tiny cafes, in which you can happily sit down and watch the world go by around you. In the Grand Bazaar, you’ll find almost everything: cushion covers, tea, spices, antiques, Turkish delight, pipes, copper handicrafts, pashminas, incense, silk, ancient money, etc… There’s also a large variety of imitation bags, clothes and watches, as much in the stalls of the Grand Bazaar as the shops which surround it.
We recommend that you always pay for your shopping in the Grand Bazaar in Turkish Lira; it’ll be cheaper that way. The sellers may be very insistent, but they’re often very friendly as well if you take the time to speak to them. Many of them speak English and small amounts of other languages. Expect a lively-eyed once-over before being presented with an initial price, which will allow you to put your bartering skills into practice…


Where: between Nuruosmaniye, Mercan and Beyazit.The Grand Bazaar has four main doors, and a few more less important ones.

When:opening hours from Monday to Saturday are from 8.30 am to 7.30 pm. Closed on Sundays.
How to get there: Beyazit tram (line T1)

Official webpage of the Grand Bazaar (in Turkish)