The Hole, cabaret in Madrid 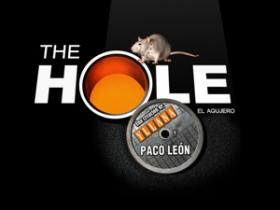 Cabaret, comedy, naked people and a rat in The Hole this 2011

This 15th of September, the provocative show The Hole will be showing for the first time in Madrid. It features lots of surprises and guarantees not to disappoint. This original cabaret will be uniting music, circus, burlesque, food, eroticism, and above all comedy on stage.

The creators of The Hole consist of actor Paco León, famous for his role as Luisa in the television series “Aida”, and the Yllana theatre company renowned for their fresh and cheeky humour. Their aim is to offer the public one of the spiciest and entertaining experiences of the year.

The show will be taking place in the Häaen Dazs Calderón Theatre which has been completely transformed so that the audience can properly enjoy the cabaret accompanied by a drink, a bottle of cava and even dinner.

The stage has even been extended to the patio to make it look like a night club.

They have worked a lot on the atmosphere so that spectators can really immerse themselves in this unusual world. They will even form part of the show. Thus, they have paid attention to the minutest details with even the waiting on staff and ushers dressed up to blend in with the show.

The Hole, inspired by the success of popular plays such as “Claque” in London and “The Box” in New York, revolves around a fresh and daring love story. The owner of a mansion organises a party in his house where the spectators are the actual guests.

Although there is a set storyline, there will be opportunity for improvisation and the transformation of the sketches and actors. Paco León will be Master of Ceremonies up until the 16th of October. He will then be replaced by Eduardo Casanova, Alex O’Dogherty, Silvia Abril, Pepa Charro and Fernando Gil.

The Hole will be running all season in Madrid and they are planning a subsequent tour of the big Spanish cities: Sevilla, Barcelona, Bilbao, Valencia and San Sebastián.

The entrance price ranges from 25 to 95 euro, plus 30 euro more for the meal during the performance. The menu is a tribute to Japanese cuisine and amongst other dishes the following will be served; tuna sushi, prawn and avocado rolls, kobe chicken brochettes and tea sweets.

A rather naughty and cheeky show that you definitely can’t miss out on if you want to enjoy the Madrid night life.