The loveliest medieval towns on the Costa Brava 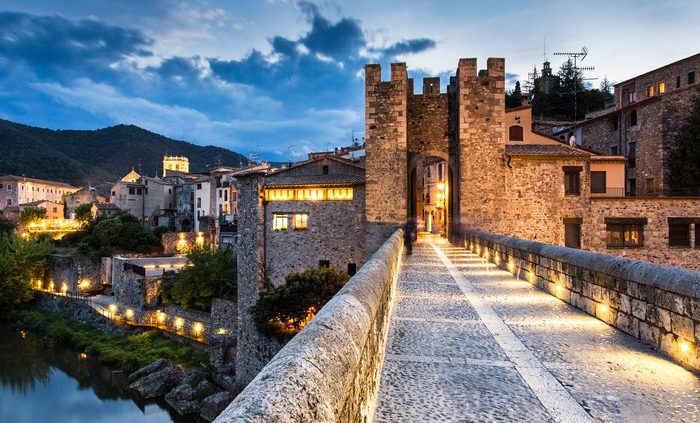 Romanesque art and medieval towns on the Costa Brava

The Costa Brava, in addition to the beauty of the natural surroundings, possesses an abundance of cultural heritage with medieval art featuring amongst the most impressive. A large amount of mediaeval remains hide amongst the green mountains and towns on the Costa Brava. Here are some of them:

A small distance away from Figueres is a town with one of the largest ensemble of medieval monuments and remains in Catalonia. From the moment you cross its iconic deck bridge, you will be immediately enchanted by the town. Its winding streets and ancient stone will take you all the way back to medieval times.

Although every little corner of Besalú is a masterpiece, we recommend that after crossing the 11th-12th century bridge you don’t miss out on some of the most iconic examples of medieval architecture such as the monastery of Sant Pere, the ancient pilgrims’ hospital and the Sant Vicenç church. You should definitely visit the Jewish quarter and the micvé, the only Jewish baths uncovered on the Iberian Peninsula.

And whilst you’re in Besalú, you should try ratafia, a typical liqueur of the area flavoured with lemon peel, herbs in various amounts including nutmeg, cinnamon, and herbs and aromatic spices.

Situated in the heart of the Cap de Creus Natural Park, the monastery of Sant Pere de Rodes stands majestically on the mountain top, from where you can admire some magnificent views of the blue waters in Llança Bay and the town Port de la Selva.

With its 12th century cloister, belfry and defence tower, this Benedictine monastery is considered one of the main exponents of medieval remains in Catalonia.

It dates back to 1 AD and is shrouded in legend related to the relics of Saint Peter the Apostle. It was running up until the 18th century when fell into disuse and all of its sculptures, reliefs and valuable objects were subsequently pillaged. However, the beauty of the monastery’s architecture and the magnificent views on offer are reason enough to visit it.

The most striking monument in Peralada is, without a doubt, the castle. Dating back to the 18th century, although it has undergone diverse reforms, it has two enormous towers, battlements and surrounding gardens. It is situated in the heart of the city centre and currently hosts an elegant casino and restaurant. In addition, every summer the ‘Castell de Peralada Music Festival’ is held there.

In addition to the castle, the town has a well-preserved historical district and several medieval buildings including the medieval cloister Sant Domènec with its beautiful architectural capitals and the Sant Martí church. You should also definitely visit the Convent of Carmen. The convent houses the Castle Museum and an impressive library home to more than 8,000 volumes with numerous incunables, manuscripts, unique and rare copies and a Cervantes collection with more than 100 editions of Don Quixote. Great for book lovers.

Peratallada is a delightful small medieval town inland from the Costa Brava, with narrow, winding streets and bougainvillea climbing up the ochre-coloured walls of its stone houses. In 1975 it was declared a Site of Historical and Artistic Interest. It has lost none of its medieval character and is spoilt by none of the modern buildings that upset the balance in other towns. Its main sights include the 13th-century Romanesque church of Sant Esteve, the 10th- and 11th-century castle and keep, and the Plaça de les Voltes, an arched square with some of the town’s best restaurants.

Steep cliffs, narrow streets, deep blue sea and white painted houses: that’s what you’ll find in Tossa de Mar. La Vila Vella, the fortified area that overlooks the beach, is the best place to appreciate its medieval past. The wall around it protected the town from attacks by pirates and other enemies from the sea. It remains almost entirely intact, with merlons and several watchtowers. Although originally built in the 12th century, much of the current site dates from the 14th century. The perimeter of the wall offers great views over the bay of Tossa de Mar.

Other medieval towns on the Costa Brava well worth visiting include:

– PALS, which you can read about in this post on our blog.

– CASTELLÓ D’EMPÚRIES, which was capital of Empúries County during the Middle Ages and still retains many important buildings.

– BEGUR, with watchtowers and a medieval castle in its historic centre, which we’ve written about here.