The most typical dishes of Turkish cuisine 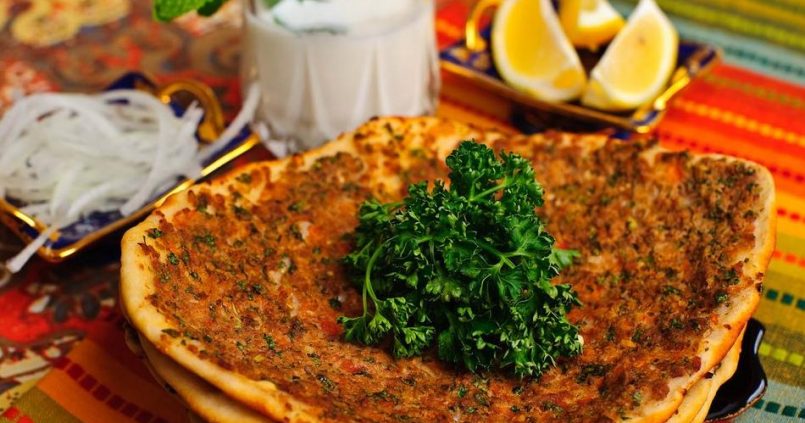 We’re sure you’ve gobbled down a tasty kebab from the corner bar more than once, but if you’re going travelling to
Istanbul in the near future and your knowledge of typical Turkish food can be reduced to döners and pita bread, we recommend you have a look at this article. Once you’re there, you’ll be happy to know a bit more about Turkish cuisine, in order to choose from the restaurant menu with skill.
Turkish food is characterised by its use of spices, vegetables, roast meats and olive oil. It’s a very balanced and tasty cuisine, which combines elements of Middle Eastern with Mediterranean cooking. Meze – “Meze” are a popular kind of starter or snack. The skill and originality of Turkish restaurants is often measured by their meze. There’s many types, but the most popular are those made from a base of aubergine, tomato, cheese, seafood, black olives and peppers. They’re normally enjoyed with an alcoholic drink.

Dolma – The name “dolma” means “something filled”, meaning that this normally refers to dishes filled with vegetables or meat. The most typical consists of vine leaves cooked in olive oil and filled with spiced rice, seasoned with lemon. Delicious!

Midye dolma – These are fried mussels, filled with rice. This is a typical dish from some of the villages of the Aegean Coast and Istanbul, where it’s considered a local speciality.

Lahmacum – Also known as “Turkish pizza”, this fast food dish consists of a base of fine dough, on which spicy meat with onion is placed. It’s sprinkled with lemon, parsley and spices.

Çorba – “Çorba”, or soups, are very common in Turkish food. They’re enjoyed all year, cold or hot. In ancient times, they were even eaten for breakfast, but these days they’re consumed above all during lunch. The most typical soups are red lentil soup (“mercimek”) and yoghurt and wheat soup.

Döner Kebap – Although it’s a fast food dish, this is the International ambassador of Turkish cuisine. It’s name means “rotating roast meat”, and that’s the way it’s made, roasting in large skewers. The most traditional is lamb. It can be eaten alone or accompanied by sauces vegetables, bread or rice. In Turkey, it’s normal to eat them at midday, not at night.

Köfte – These are a type of typical meatballs which are made with spiced meat, normally beef or lamb. They’re often mixed with different spices and sometimes also with spiced onion, vegetables or egg. They’re cooked roasted, fried or steamed. In Turkey, there exists almost 300 varieties of köfte.

Baklava – “Baklava” are sugary cakes of puff pastry which contain walnuts, pistachios, dried fruit and honey syrup. This is one of the most typical Turkish desserts, and there’s a very wide variety of them.

Lokum – Also known as “Turkish delight”. These are sweets with a similar texture to gummy bears, which are made with a mixture of starch and sugar. They’re flavoured with lemon or rosewater, and often include pistachios, hazelnuts or walnuts. They’re cut into cubes and served dusted with icing sugar.

Ayran – This is one of the most often-consumed drinks in Turkey, ideal for combating the heat. It consists of liquid sheep’s-milk yoghurt, with lemon juice, salt and pepper. Yoghurt is a very important element in Turkish cuisine, you’ll see it included in many dishes.

Café turco – As well as tea, in Turkey lots of coffee is consumed as well. It’s called “kahve” and it’s prepared directly with sugar, so you need to say how you want it when you order. It can be “sade” (without sugar), “orta” (normal) or “sekerli” (sweet). It’s never taken with milk.

Raki – Raki is a liquor which has a flavour very similar to aniseed, and which is often enjoyed after dinner or to accompany meze. It’s normally mixed with water.

And now that you’re more familiar with Turkish food, you can begin to get an idea of what toe at in Istanbul. When you get back, tell us what you liked most.

If International flavours are of interest to you, you might want to have a look at these articles: