The Mountain and Monastery of Montserrat near Barcelona 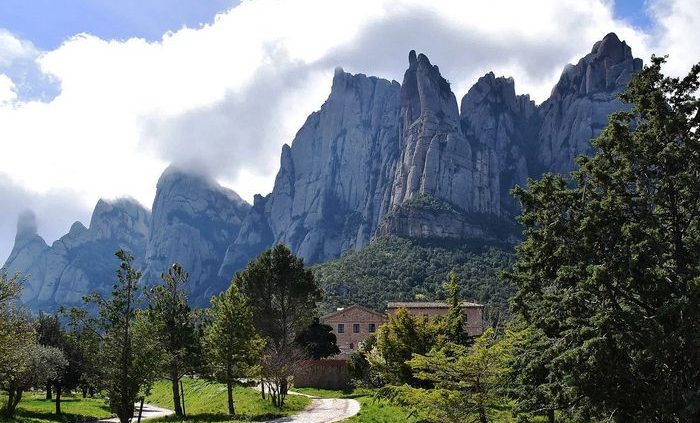 Trip to Montserrat from Barcelona

In Barcelona there’s always a thousand and one things to do: exhibitions, historical buildings, festivals… but if you need a break from the city and want to discover a unique place, take a day trip to Montserrat mountain.

Montserrat mountain is a unique place with a mystical, legendary character set in stunning surroundings. Its Benedictine monastery is over a thousand years old and welcomes pilgrims who believe it might be the hiding place of the Holy Grail.

According to geologists, the mountain on which Monserrat monastery is built emerged from the waters in the Tertiary period. Over the millennia, the rain, sun and wind moulded it into its highly characteristic shape. In Catalan, Monserrat means ‘serrated mountain’ because from a distance its silhouette looks like the jagged teeth of a saw.

Monserrat monastery is home to La Moreneta, a popular black Madonna. The Virgin Mary is said to have appeared on the mountain in the late 19th century at various hermitages dotted around the mountain, and the first image was found by some shepherds inside a cave. The current image is a 12th-century poplar-wood sculpture. The Lady of Monserrat is the patron saint of Catalonia.

The monastery complex comprises two sets of buildings and several courtyards hewn out of the craggy mountain. On one side is the basilica and monastic outbuildings; on the other are buildings for visitors and pilgrims, including restaurants, cafes and shops.

Montserrat monastery has a museum with a range of collections, including an Egyptian sarcophagus and major works of modern paintings by artists such as Santiago Rusiñol, Salvador Dalí, Pablo Picasso, Claude Monet, Caravaggio and El Greco.

The monastery also has a well-stocked library. With over 300,000 volumes and numerous incunabula, it is one of the most valuable libraries in Spain.

Other points of interest include the cloister, by famous architect Josep Puig i Cadafalch, and the exceptionally melodious basilica organ. Montserrat monastery is also world famous for its Escolania, the oldest boys’ choir in Europe. You can hear them sing at different times of the day, every day of the week except Saturday.

If you want to explore Montserrat’s wilder side and take in the spectacular views, you can set off on one of the marked trails on the mountain. Most are not too difficult and let you see how the mountain was formed and learn more about the fauna, flora and local legends in an engaging fashion.

How to get to Montserrat monastery from Barcelona

If you want to go Montserrat from Barcelona by public transport, you can take a Ferrocarrils de la Generalitat (FGC) train. Trains on Line R5 towards Manresa leave from Plaça d’Espanya about every half an hour. You should get off the train at Monistrol de Montserrat, where you take a rack railway up to the monastery for 15 minutes as you enjoy the beautiful surroundings.

If you prefer, you could get off at Montserrat Aeri instead and take the cable car up to the monastery. As you slowly rise up, you can admire the stunning views and buildings.

HOW TO GET THERE BY COACH

You can also get to Montserrat by direct coaches run by Julià Tours. They leave from Sants bus station first thing in the morning and return in the afternoon. You’ll find timetables on their website.

If you fancy hiking up the mountain, there are several marked trails.