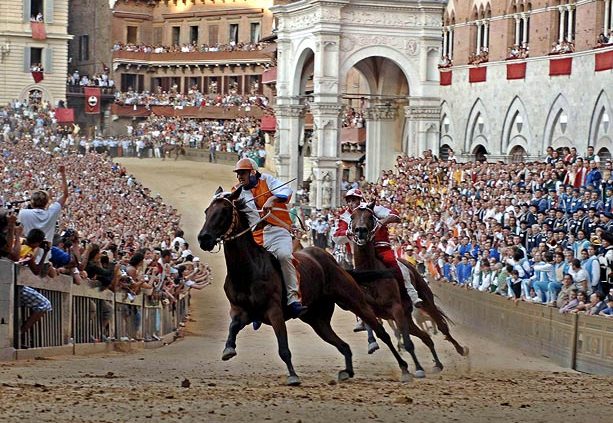 The mediaeval knight’s race of Siena

The Palio di Siena is one of the oldest horse races in the world. It’s a historical celebration, full of traditions and colour, which attracts millions of visitors to this charming village in the heart of Tuscany every summer.

Sienna is just an hour from Florence, and you definitely won’t regret the visit. It was a powerful city during the Middle Ages, and until present day has conserved the best parts of those times in its historic centre, palaces and gothic cathedral (constructed from coloured marble). The “Piazza del Campo”, in the city centre, has for many centuries been the nerve centre of the city, and is also the site of this unique horse race with an ancient flavour: the Palio di Siena.

The Palio di Siena is an equestrian competition of mediaeval origin, in which representatives of the various neighbourhoods (‘contrade’) of the city take part. Each district bears a coat of arms and has set colours, which participants in the competition wear when competing for the honour of their neighbourhood.
Although Siena is divided into 17 contrade, only 10 participate in each race, which are chosen by a system which combines fairness with pot luck.

The winner of the Palio di Siena is always the first horse which, with or without rider, manages to do three clockwise laps of the square while carrying the colours of their district.

The prize for the winning horse (and also rider, if they’ve managed to stay on the back of their mount) is the ‘palio’, a painted and embellished silk standard. The ‘palio’ is considered to be a symbol of good luck and happiness, and after it’s been won becomes public property, where it’s conserved as a trophy in the church of the winning district.

The Palio di Siena is celebrated on two occasions each year, during the following dates:

– On the 2nd of July, the Palio di Provenzano is celebrated.
– On the 16th of August, the Palio dell’Asunta is run.

All details regarding the event, race and timetables can be consulted via the official web page of the Palio di Siena. If you’re lucky enough to be in Florence during these dates, don’t miss it!