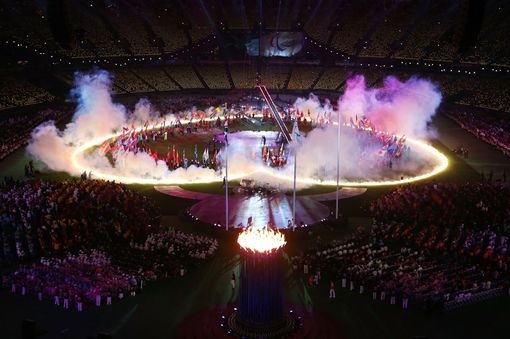 Rihanna, Coldplay and Jay-Z in the Paralympics Closing Ceremony 2012

As Danny Boyle intended, this year in the Olympics ceremonies we’ve seen some of the best of British: humorous, original and quirky. The Paralympics Closing Ceremony finally took place yesterday in an Olympic occasion that will leave a bittersweet taste in the mouths of all those who’ve participated in and enjoyed watching the Olympic Games in London 2012.

Lyrical and theatrical, the Paralympics Opening Ceremony featured a performance from Stephen Hawking that was as thought-provoking as it was entertaining. It would not be an exaggeration to say that over the course of the Games, some of the best sporting activity has been seen in the Paralympics, with fast-paced sports such as blind football and wheelchair rugby racing through stadiums at hare-necked speed.

As British as bad weather (and, some might say, just as wet), Coldplay kicked off the Paralympics Closing Ceremony with an excellent, if perhaps slightly lengthy, set. Timing in general was much slicker than in the somewhat unfocused Olympics Closing Ceremony (which, let’s be honest, had a hard time living up to Danny Boyle’s incredible Opening Ceremony anyway). All three acts were praised for their lack of egoism and celebration of what really matters: the sporting acheivements of the Paralympics.

Ultimately, as the Olympic cauldron returned back to the ashes and dust from which it came, we’re pleased to say that the Paralympics Closing Ceremony was received with good reviews. A summer-long love affair with sport has ended, but will remain with us for long to come.

And, in case you missed it…

For medal count results for all remaining countries, click here.