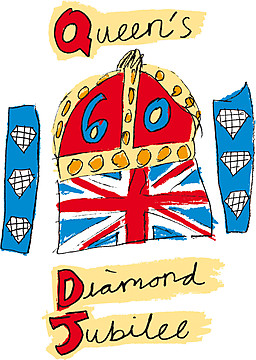 The Diamond Jubilee of Queen Elizabeth II in London celebrates 60 years of the queen in the United Kingdom throne. To commemorate this event, a wide range of activities and celebrations have been organized in London throughout 2012, although the main events will take place from 2 to 5 June.

This is a historic milestone, as only Queen Victoria has previously celebrated a Diamond Jubilee, it was in 1897. So if you’re planning a vacation in London this summer, take note!

The Diamond Jubilee of Queen Elizabeth II celebrations began this week with the Queen’s speech to the Parliament. Over the coming months numerous events, exhibitions, concerts and other entertaining activities will take place in London to celebrate the Diamond Jubilee. Here is a selection of the main events:

• 60 Diamond Jubille Pageant (10th to 13th May) – A great equestrian show in the grounds of Windsor Castle, with the presence of the Queen and more than 500 horses and participants from around the world: Russian Cossacks, cowboys, Zulu warriors, Canadian Mounted Police,…

• The Big Lunch (3rd June) – Thousands of people will gather in the parks and squares of London to enjoy a picnic lunch honouring the Queen.

• Thames Diamond Jubilee Pageant(3rd June) – An impressive river pageant with fireworks, concerts and more than 1,000 boats floating along the Thames. It will be lead by Queen Elizabeth II aboard the Spirit of Chartwell.

• Carriage Procession (5th June) – After a service of thanksgiving at St. Paul’s Cathedral, the Queen and the Royal Family will go on the streets in a carriage. Afterwards, they will step out onto the balcony of Buckingham Palace to greet the people gathered around the place.

In addition, there will be several exhibitions celebrating the Diamond Jubilee. Two of the most interesting are:

• The Queen: Art and Image (17th May – 21st October) – The National Portrait Gallery will be exhibiting portraits of the monarch during the 60 years reign, from artists such as Andy Warhol, Annie Leibovitz or Lucian Freud.

• Diamonds (from 31 July to 20 September) – An exhibition at Buckingham Palace showing how the British monarchy has used diamonds. Tiaras, necklaces and other jewellery belonging to the Queen and The Royal Collection will all be on show.

The celebrations of the Diamond Jubilee Queen Elizabeth II will coincide this summer in London with the Olympic Games, World Shakespeare Festival 2012 and the Cultural Olympiad. The British capital will be one of the best holiday destinations in 2012!