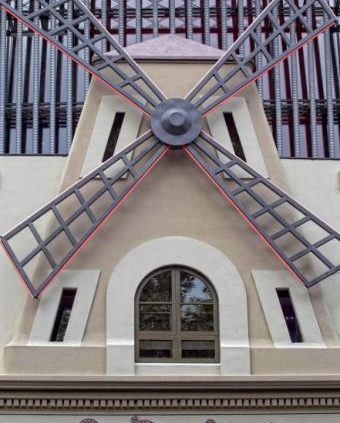 On Monday the 18th of October the legendary music hall in Barcelona, El Molino, will be raising its curtain. Following 13 years of closure, this 100 year old theatre will once again open its doors with an opening performance by the Los Chanceletes, directed by Josep Maria Portabella and entitled ´Made in Paralleles`, that will be starring a score of artists, and which will comprise a combination of diverse stage genres, although the full details will be kept secret until the play starts showing.

Currently owned by the company Ociopuro, this theatre has undergone some serious restructuring which in the end has only preserved the façade with its famous windmill sails and the small stage that only fits 250 people. However, the building now has eight floors as opposed to the two floors that the theatre originally comprised.

The opening performances will be taking place until the 21st of October, although the show ´Made in Paralleles` is hoping to become a regular on the Catalan night-scene on a legendary route in Barcelona that once of a day was the place to go out in Barcelona, and thus offering diverse types of the performance and keeping the doors open to the public from the evening until the early hours of the morning.

Thus, the performance on Monday will be independent ones, with concerts from diverse artists. In addition, on Tuesday, flamenco will be the main theme of the show comprising a programme directed by the singer Mayte Martín, that when she so chooses will be taking to the stage herself to perform her own particular version of flamenco to those who attend the event.

The theatre comprises a Golden Bar with views of el Paral-lel, and even a rehearsal room where workshops will be carried out by the artists. Furthermore, the original 250 person capacity will be conversed so as to maintain the audience close to the artists.

Truly great news for the Barcelona cultural scene as Barcelona and Paral·lel have finally got back their icon, and fun theatre of the city.