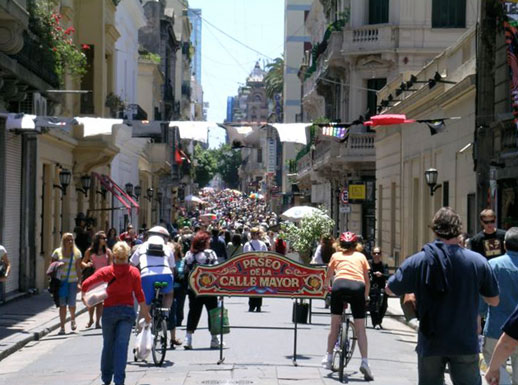 Buenos Aires is often known as “the Paris of America”, and in the historical district of San Telmo, it’s easy to see why. In spite of this moniker, however, the district of San Telmo has retained a distinctly Argentinean flavour. A walk through San Telmo is a walk decorated by cobbled streets, lacy façades and wrought-iron balustrades; a walk through the past and into the vibrant present of Buenos Aires.

Originally inhabited by nobles, San Telmo in Buenos Aires was left practically deserted when yellow fever forced mass exodus to the Barrio Norte in 1870. Massive influx of immigrants soon took pace, who made their homes in the deserted courtyards and large manor houses of the nobles. Today, these ‘conventillos’ have become art galleries and antique shops that give only the vaguest clues to the stories their brickwork conceals.

Things to do in San Telmo, Buenos Aires

The "C/ Defensa" (Defensa Street) in San Telmo is the area’s spinal chord. Full of people, cafés, shops and bars and street vendors selling honey-roasted peanuts, the area jerks even further to life when the San Telmo fair is on on Sundays. Get ready to tango, and be swept up past the two hotspots Defensa Street runs through: Lezama Park and the Plaza Dorrego.

"Parque Lezama" (Lezama Park) contains a deep ravine and ampitheatre, as well as several interesting works of art and architecture. It includes the Russian Orthodox Church – see photo – and the National History Museum; and is one of the most visited sites in Buenos Aires.

You’ll find the elegant Plaza Dorrego a great place to have a coffee and watch the world go by. It has also been listed as a Historic Site of Argentina. Of particular interest is the "Feria de San Telmo" (San Telmo Fair) antiques market, which takes place every Sunday and, as well as containing every kind of unnecessary trinket you can imagine, also attracts percussionists, tango artists and other exhibitions of talent.

San Telmo is a great place to go for tango shows, which are directed towards tourists and locals alike. There’s also several museums here, including the Modern Art Museum of Buenos Aires and the Argentine Penitentiary Museum. A curiosity of the San Telmo district is also the “Casa Mínima”, a house which, at just 2.5 m wide, is the narrowest in the city. One of the best activities you can try out in San Telmo, however, is simply wandering through the nostalgic, bohemian streets of the district, imagining the scenes that have taken place within them and enjoying a drink in one of the cafés that have been meeting points for centuries of friends.