The San Telmo Palace, a Baroque Gem in Seville 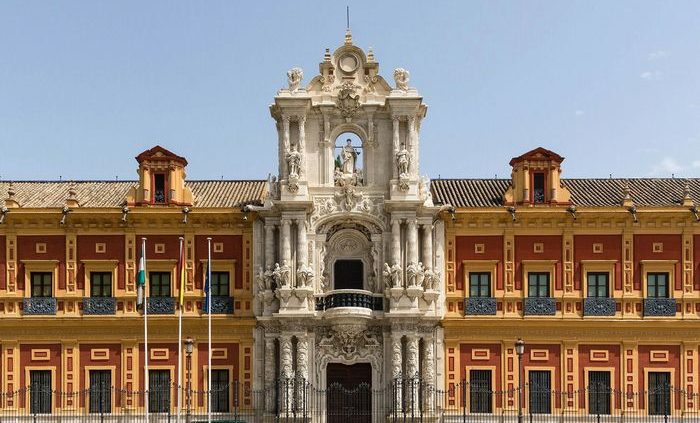 Seville has so many architectural wonders that it is easy to overlook more than one as you dash between the Alcázar, La Giralda and Plaza de España. Don’t make this mistake with the magnificent San Telmo Palace. This beautiful, majestic Baroque building, once the Seminary School of the University of Navigators, makes its presence felt throughout the city.

History of the San Telmo Palace in Seville

Work on the San Telmo Palace in Seville got under way in 1682 to set up a school and seminary for the orphan children of sailors, to teach them sailing skills at a time when trade with the Indies was booming. Construction continued off and on for decades, as funds ebbed and flowed, until it was finally finished in 1796.

In 1841, the San Telmo Palace became the headquarters of the Military Naval College, and in later years served as the headquarters of various institutions, including the Railways Company and the Royal College of Humanities. Through its doors walked the likes of Gustavo Adolfo Bécquer and Duke Antonio de Orleans, who purchased it and lived there with his wife, María Luisa Fernanda de Borbón, as his Spanish residence. It is currently the headquarters of the Head of the Andalusian Government.

The key sights at the San Telmo Palace in Seville

The entire palace is a marvel in itself, but some sights really mustn’t be missed. The façade is a superb work of Seville Baroque art in white marble, and the four majestic towers rise up over the rest of the building. Once inside, the chapel, with its 18th-century altarpieces, is definitely the highlight of any visit. Make sure you don’t leave your camera at home or you’ll miss what could be the most beautiful shots of your trip!

If you’re sightseeing in Seville and want to visit this palace, you should bear in mind that you can only book tours on Thursday, Saturday and Sunday. Admission is free, but you must book in advance. You may not enter certain rooms with suitcases or in stiletto heels, and there is no cloakroom. So, don’t try to squeeze a visit in on your last day when you’ve got all your luggage with you.

We know there are lots of things to see in Seville, but you should savour this Baroque architectural gem and take your time about it. There are interpreters available and it is fully accessible.

The San Telmo Palace is in Avenida de Roma, close to the River Guadalquivir. Other nearby sights include the University of Seville and the famous Golden Tower. The easiest way to get there if you don’t want to walk is to take the metro to Puerta de Jerez.