The Temple of Debod, a piece of Egypt in Madrid 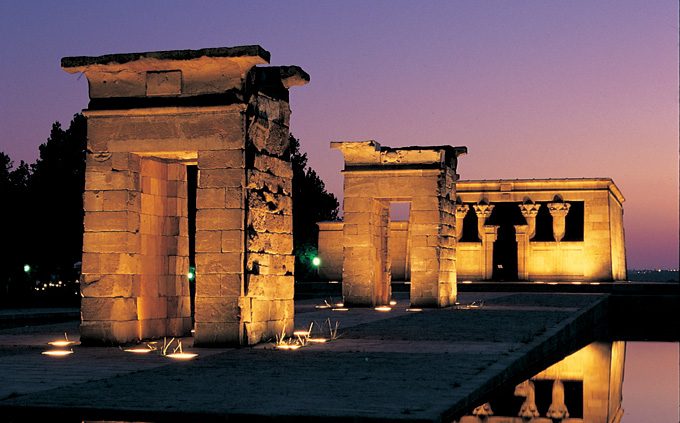 The Temple of Debod, a piece of Egypt in Madrid

The Temple of Debod, or Templo de Debod, is an ancient Egyptian monument which prevails in the middle of Madrid. Like an oasis in the middle of an urban desert, outside of time and space, this is the only Egyptian temple which exists in Spain.

The Temple of Debod was a present to Spain from the Egyptian government in 1968. It was granted in reward for Spanish collaboration in the rescue of the temples of the valley of Nubia, such as Abu Simbel, during the construction of the Aswan dam. Were it not for international help, these archaeological treasures would have remained submerged in murky waters.

The Temple of Debod was constructed 2,200 years ago according to the orders of Nubian king Adijalamani of Meroë in the South of Egypt. It was built in the coveted lands that permitted access to the gold mines and exotic African treasures such as ivory, ebony and ostrich plumes. The temple paid homage to Amun, father of the Egyptian gods, and to Isis, goddess of fertility.

During the donation, the Temple of Debod was moved to Madrid stone by stone and was reconstructed in a way that preserves its original orientation.

The monument is surrounded by gardens, so it’s a good idea to make the most of your visit by taking a stroll and bringing a tasty picnic with you. Furthermore, from the foot of the Temple of Debod, you can enjoy beautiful views of the Royal Palace, Almudena Cathedral and the Casa de Campo park.

And if you’re not superstitious, you can also head over to see the temple at night, lit up by the moon and surrounded in mystery. It’s said that a black cat, which could be the reincarnation of Amun, prowls the grounds when the sun goes down.

Temple of Debod – Practical information for your visit